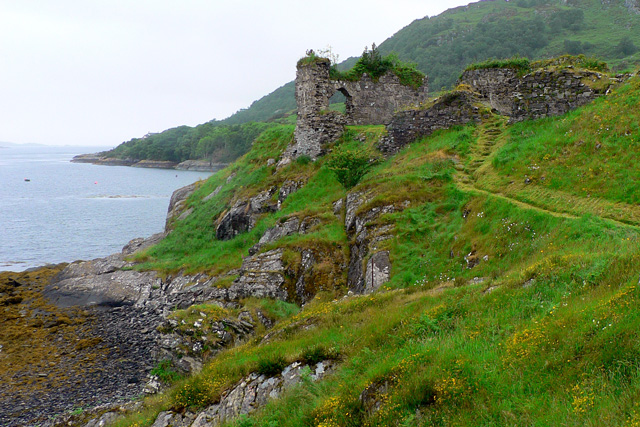 Location: Lochcarron, Highland, Scotland.
Built: --.
Condition: Ruin.
Ownership / Access: National Trust for Scotland
Opening times: Check their website for more info.
Price of admission: Check their website for more info.
Notes: Strome Castle is a ruined castle on the shore of Loch Carron in Stromemore, 3.5 miles south-west of the village of Lochcarron, on the west coast of the Scottish Highlands. Originally built by the Macdonald Earls of Ross. Later in 1472 the castle was owned by the Clan MacDonald of Lochalsh and Alan MacDonald Dubh, 12th Chief of the Clan Cameron was constable on behalf of the MacDonalds of Lochalsh. In 1539 King James V of Scotland granted the castle to the Clan MacDonnell of Glengarry and Hector Munro, chief of the Clan Munro was constable of the castle for the MacDonalds of Glengarry. Later in 1602 the castle was besieged by Kenneth Mackenzie, 1st Lord Mackenzie of Kintail, chief of the Clan Mackenzie, assisted by their allies the Clan Matheson. After the MacDonalds surrendered it was demolished and blown up. The MacDonnells of Glengarry built a new castle called Invergarry Castle. In 1939 the ruined Strome Castle was presented to the National Trust for Scotland. Today the castle comprises a courtyard and the remains of a square tower.

How To Get To Strome Castle (Map):