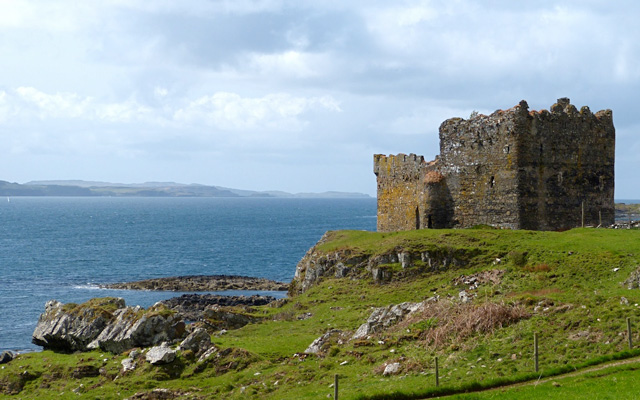 Location: Lochaber, Highland, Scotland.
Built: 13th century.
Condition: Ruin.
Ownership / Access: --
Opening times: Check their website for more info.
Price of admission: Check their website for more info.
Notes: Mingarry Castle (or Mingary Castle) (Caisteal Mhiogharraidh in Gaelic) is a castle situated a mile south-east of the small village of Kilchoan in Lochaber, Scotland. Nestled on ridge of rock overlooking the sea, it was considered a strategically important site in terms of communication with overseas areas and as an entranceway to the Sound of Mull. The castle fell into ruin about 600 years after its construction in the 13th century; the majority of the building, however, dates from much later than this, from the 17th century onwards. Mingarry is roughly hexagonal in shape with nine-foot-thick walls, thicker on the seaward side. The remains of the castle are protected as a category A listed building and as a scheduled monument. Originally built for the Clan MacDonald of Ardnamurchan (also known as MacIain of Ardnamurchan), the castle has had many different occupants. King James IV of Scotland used it as a stronghold for fighting off Clan Donald in the late 15th century. In 1515 the castle was besieged by the Clan MacDonald of Lochalsh and again two years later when they finally took the castle. In 1588 the chief of the Clan MacLean of Duart resided there after capturing the chief of the Clan MacIan of Ardnamurchan.[citation needed] In 1588, one of the ships of the Spanish Armada, named the San Juan de Sicilia, landed on Mull and MacLean of Duart used troops from the ship to aid him in his warring against the MacDonalds of Clanranald and the MacIans of Ardnamurchan. On one occasion, a force from the ship besieged to the castle for three days before withdrawing. Other occupants over the years included the Clan Campbell, the Earls of Argyll (in 1612), and Alasdair Colkitto MacDonald who fought the English Parliamentarians of Oliver Cromwell in 1644. In 2006 a Channel 4 television programme Wreck Detectives set out to uncover a shipwreck in the Sound of Mull, directly below the castle. The wreck was finally dated to 1644 in the time of Alasdair MacDonald. Renovation and Restoration. A recent survey showed that the main curtain wall on the sea side is in imminent danger of collapse. Work will shortly commence to stabilise the wall by underpinning it before proceeding to preserve and restore the castle, after important preliminary archaeological work has been completed. All work is being undertaken by the Mingary Castle Preservation and Restoration Trust, a registered charity in Scotland. Detailed commentary on progress and emerging insights from the largely untouched archeology will be provided.

How To Get To Mingarry Castle (Map):