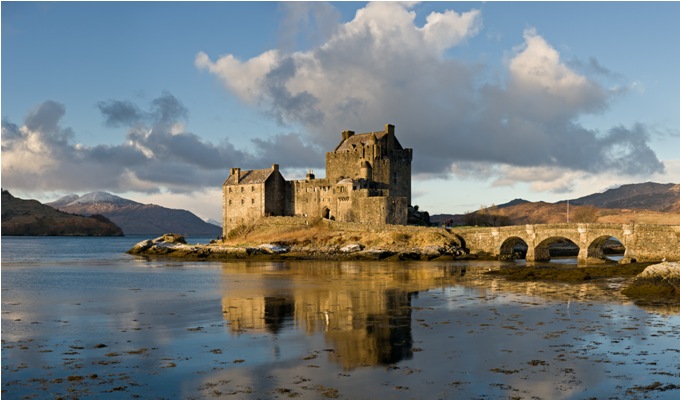 Location: Loch Duich, Highlands, Scotland.
Built: Early 13th century.
Condition: Ruins.
Ownership / Access: --
Opening times: Check their website for more info.
Price of admission: Check their website for more info.
Notes: The castle was founded in the thirteenth century, and became a stronghold of the Clan Mackenzie and their allies the Clan Macrae. In the early eighteenth century the Mackenzies' involvement in the Jacobite rebellions led in 1719 to the castle's destruction by government ships. Lieutenant-Colonel John Macrae-Gilstrap's twentieth-century reconstruction of the ruins produced the present buildings., In the earlier thirteenth century, during the reign of Alexander II (ruled 1214-1249), a large curtain-wall castle (wall of enceinte) was constructed that enclosed much of the island. At this time the area was at the boundary of the Norse-Celtic Lordship of the Isles and the Earldom of Ross: Eilean Donan provided a strong defensive position against Norse expeditions. A founding legend relates that the son of a chief of the Mathesons acquired the power of communicating with the birds. As a result, and after many adventures overseas, he gained wealth, power, and the respect of Alexander II, who asked him to build the castle to defend his realm. At a later date the island became a stronghold of the Mackenzies of Kintail, originally vassals of Uilleam, Earl of Ross. At this early stage, the castle is said to have been garrisoned by Macraes and Maclennans, both clans that were later closely associated with the Mackenzies. Traditional Mackenzie clan histories relate that Earl William sought advantage from the Treaty of Perth of 1266, by which King Magnus VI of Norway ceded the Hebrides to Scotland, and demanded that his kinsman Kenneth Mackenzie return the castle to allow his expansion into the islands; Mackenzie refused, and Earl William led an assault against Eilean Donan that the Mackenzies and their allies repulsed. The Mackenzie clan histories also claim (with little, if any, supporting contemporary evidence), that Robert the Bruce sheltered at Eilean Donan during the winter of 1306 to 1307; the castle escaped any other involvement in the Wars of Scottish Independence. In 1331 Thomas Randolph, Earl of Moray, sent an officer to Eilean Donan to warn the occupants of his forthcoming visit. In preparation 50 wrongdoers were rounded up and executed, their heads being displayed on the castle walls to Moray's approval. By the middle of the 14th century the Mackenzies are said to have been on the losing side in the ongoing feuding with the Earls of Ross; Earl Uilleam III granted Kintail to Raghnall mac Ruaidhri, Lord of Garmoran in 1342. With the assistance of Leod Macgilleandrais, the Earl allegedly apprehended Kenneth Mackenzie, 3rd of Kintail, and had him executed in 1346 at Inverness. Through this period Eilean Donan is said to have been held by Duncan Macaulay for the Mackenzies, against the Earl and his allies. Kenneth's young son Murdo Mackenzie supposedly evaded the Earl's attempts to eliminate him, and on the return of David II from exile Murdo Mackenzie was allegedly confirmed in the lands of Kintail and Eilean Donan by a charter of 1362 (of which, however, no trace survives to the present day). At some point in the earlier 14th century it is thought that the Clan Macrae began to settle in Kintail as a body, having migrated from the Beauly Firth, and there gained the trust of the Mackenzie lairds through possible kinship and an advantageous marriage. The Macraes began to act as Mackenzie's bodyguards, acquiring the soubriquet "Mackenzie's shirt of mail".

How To Get To Eilean Donan Castle (Map):