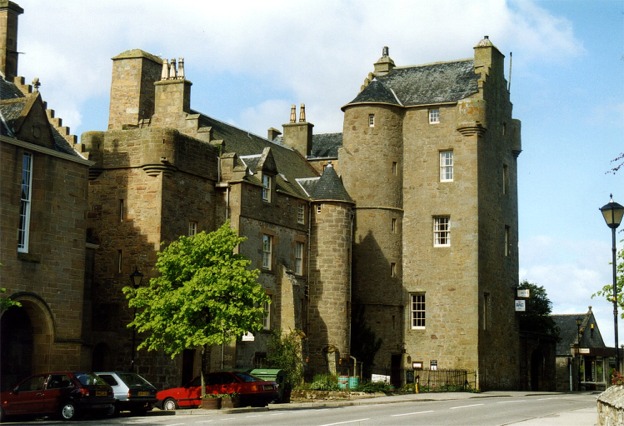 Location: Dornoch, Sutherland, Scotland.
Built: 1500.
Condition: Occupied.
Ownership / Access: --
Opening times: Check their website for more info.
Price of admission: Check their website for more info.
Notes: Dornoch Castle is situated opposite Dornoch Cathedral in the village of Dornoch, in Sutherland, Scotland, a little over 40 miles (64 km) north of Inverness.Dornoch Castle was built around 1500 as the home of the bishops of Caithness. Bishop Robert Stewart gifted the castle to John Gordon, 11th Earl of Sutherland in 1557. In 1570 the castle was set alight in a feud between the McKays and Murrays. The rebuilding which followed included the addition of the upper part of the tower. The castle decayed during the 18th century, but was restored in 1813-1814 to serve as a school and jail. In 1859-60 it became a court house, and was made the headquarters of the Sheriff of Sutherland. Further alterations were made around 1880, including the heightening of the south-west block, and the addition of a three-storey east tower. Following the restoration the castle became a hunting lodge for visiting sportsmen. In 1947 it became a hotel. The Dornoch Castle Hotel has 24 rooms, including suites, and garden rooms, which were built in the 1970s. In addition, there are several personalized rooms and a restaurant. The castle is a category B listed building.The Castle is believed to have been haunted by the ghost of Andrew McCornish who was hanged for sheep stealing.

How To Get To Dornoch Castle (Map):