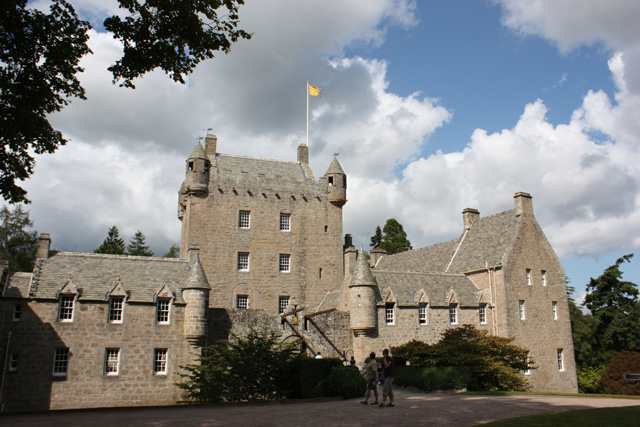 Location: Nairn, Highlands, Scotland.
Built: 15th century.
Condition: Occupied.
Ownership / Access: --
Opening times: Check their website for more info.
Price of admission: Check their website for more info.
Notes: Cawdor Castle is set amid gardens in the parish of Cawdor, approximately 10 miles (16 km) east of Inverness and 5 miles (8.0 km) southwest of Nairn in Scotland. The castle is built around a 15th-century tower house, with substantial additions in later centuries. Originally a property of the Clan Calder, it passed to the Campbells in the 16th century. It remains in Campbell ownership, and is now home to the Dowager Countess Cawdor, stepmother of Colin Campbell, 7th Earl Cawdor. The castle is perhaps best known for its literary connection to William Shakespeare's tragedy Macbeth, in which the title character is made "Thane of Cawdor". However, the story is highly fictionalised, and the castle itself, which is never directly referred to in Macbeth, was built many years after the life of the 11th-century King Macbeth. The castle is a category A listed building, and the grounds are included in the Inventory of Gardens and Designed Landscapes in Scotland, the national listing of significant gardens.The castle is known for its gardens, which include the Walled Garden (originally planted in the 17th Century), the Flower Garden (18th century), and the Wild Garden (added in the 1960s). In addition, the castle property includes a wood featuring numerous species of trees (as well as over 100 species of lichen).

How To Get To Cawdor Castle (Map):