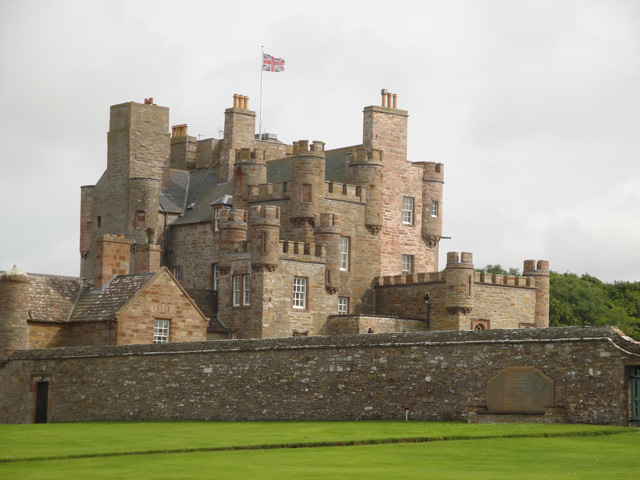 Location: Caithness, Scottish Highlands.
Built: 1566-1572.
Condition: Occupied.
Ownership / Access: Castle of Mey Trust.
Opening times: Check their website for more info.
Price of admission: Check their website for more info.
Notes: The Castle of Mey (formerly Barrogill Castle) is located in Caithness, on the north coast of Scotland, about 6 miles (9.7 km) west of John o' Groats. In fine weather there are views from the castle north to the Orkney Islands. The lands of Mey belonged to the Bishops of Caithness. The Castle of Mey was built between 1566 and 1572, possibly on the site of an earlier fortification, by George Sinclair, 4th Earl of Caithness. Originally a Z-plan tower house of three storeys, it had a projecting wing at the south-east, and a square tower at the north-west. The Castle passed to George Sinclair's younger son William, founder of the Sinclairs of Mey, although it later became the seat of the Earls. The Castle's name was changed to Barrogill, and it was extended several times, in the 17th and 18th centuries, and again in 1821 when Tudor Gothic style alterations were made, to designs by William Burn. Barrogill passed out of the Sinclair family in 1889, on the death of the 15th Earl, and in 1928 it was purchased by Captain Imbert-Terry. The Castle was used as an officers' rest home during the Second World War, and in 1950 the estate farms were sold off.The Castle of Mey Trust was established by a Deed of Trust executed on 11 June 1996. As of March 2014, the list of Trustees included: Ashe Windham, CVO (Chairman); The Rt. Hon The Earl of Caithness, PC, FRICS; The Rt. Hon The Viscount Thurso, MP; Sir Ian Grant, CBE, DL, FRAgS. There are also a number of Honorary Patrons associated with the trust: Lady Elizabeth Anson; Ken Bruce; Susan Hampshire; Kirsty King; HE Mahfouz bin Mahfouz; Alan Titchmarsh (who is noted as being the first Honorary Patron). The trust together with the Friends and Patrons help to maintain and promote the castle and all fundraising events.

How To Get To Castle of Mey (Map):

Castle of Mey On Wikipedia
The Castle and Gardens of Mey