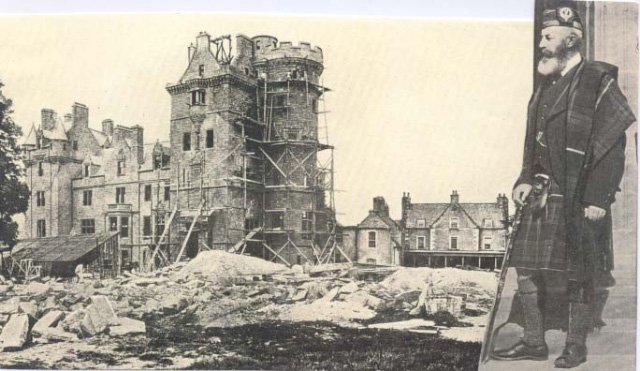 Location: Beauly in Inverness-shire, Scotland.
Built: 12th century.
Condition: Occupied.
Ownership / Access: Private.
Notes: Beaufort Castle (Scottish Gaelic: Caisteal Duuaidh) is located near Beauly in Inverness-shire, northern Scotland. It is 1 mile (1.6 km) north of Kiltarlity, and 12 miles (19 km) west of Inverness. The present castle is a Baronial style mansion built in 1880, but incorporates older building work. There has been a castle on the site since the 12th century. Beaufort is the traditional seat of the Lords Lovat. The Baronial mansion incorporates a private Roman Catholic chapel. The remains of Dounie Castle stand beside the house, and comprise a single wall, 11 metres (36 ft) long and 1.5 metres (4 ft 11 in) high, with a plaque stating that it is "the ruin of Castle Downie, the ancient stronghold of the Frasers of Lovat, built c. 1400, and destroyed by Cumberland after the battle of Culloden". The house is a category A listed building.[4] The grounds are included in the Inventory of Gardens and Designed Landscapes, the national listing of significant gardens in Scotland.

How To Get To Beaufort Castle (Map):