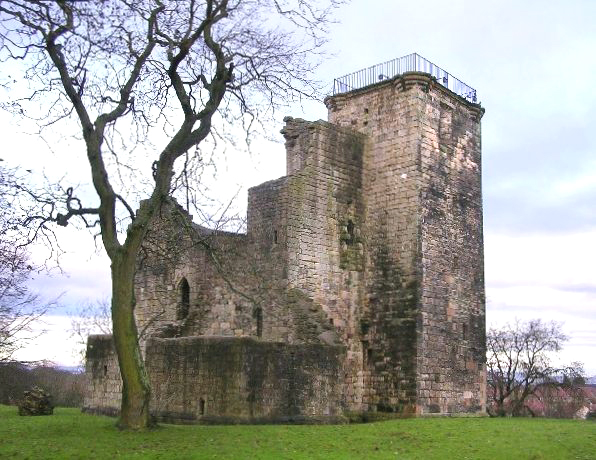 Location: Pollok, Glasgow, Scotland.
Built: 12th century; Rebuilt c. 1400.
Condition: Ruined.
Ownership / Access: Historic Scotland.
Notes: Crookston Castle is located in the Pollok area of south-west Glasgow, Scotland. The castle is located some 5 miles (8 km) south-west of the city centre, and 3 miles (5 km) east of Paisley, overlooking the Levern Water, just before its confluence with the White Cart Water.Crookston is surrounded by a defensive ring-ditch that dates back to the 12th century when Sir Robert de Croc, who also gave his name to the village of Crookston, built a timber and earth castle. Remains of a chapel founded by de Croc in 1180 have been uncovered. Evidence of an even earlier fortification on the same site has also been found. The lands of Crookston were bought by Sir Alan Stewart in 1330, and passed to Sir John Stewart of Darnley, in 1361. The Darnley Stewarts replaced the early castle with the present stone structure around 1400. In 1489 the Stewart Earl of Lennox rebelled against James IV. James responded by bringing the cannon Mons Meg from Edinburgh, and bombarding the castle, virtually destroying its western end, and ensuring a quick surrender. In 1544 the castle was besieged and taken by the Earl of Arran and Cardinal Beaton, while the then Earl of Lennox was defending Glasgow Castle. At this time, Crookston was regarded as the principal house of the earls of Lennox. Most famous of the Darnley Stewarts was Henry Stuart, Lord Darnley, who was second husband to Mary, Queen of Scots. It may have been at Crookston that the couple were betrothed,under a yew tree. The yew was felled in 1816, and a model of Crookston Castle, now on display in Pollok House, was carved from its wood. In 1572, Crookston was granted to another Stewart, Charles, the Earl of Lennox. In 1703 the Duke of Lennox sold the castle to the Duke of Montrose, and it remained the property of the Dukes of Montrose until 1757, when it was sold by William Graham, 2nd Duke of Montrose to the Maxwells of Pollok. Following several years of abandonment, the castle was partially restored by the Maxwells in 1847, to honour Queen Victoria's visit to Glasgow. In 1931, Crookston became the first property acquired by the National Trust for Scotland, having been presented by Sir John Maxwell Stirling-Maxwell, who was one of the Trust's founder members and first Vice Presidents. Today, Crookston Castle is a Scheduled Ancient Monument, and a Category A listed building. Its maintenance is the responsibility of Historic Scotland.

How To Get To Crookston Castle (Map):