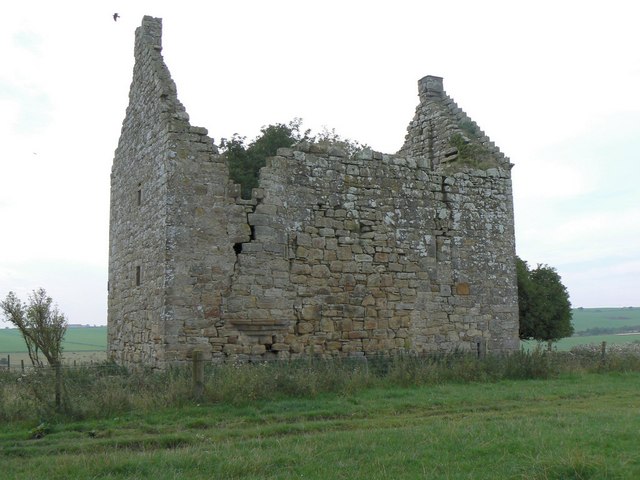 Location: Fife, Scotland.
Built: 1580.
Condition: Ruins.
Ownership / Access: Nr Dunino.
Notes: Pittarthie Castle was a laird's fortified house in Fife, Scotland. The ruins of the structure are located 2.5 kilometres (1.6 mi) southwest of Dunino, and 6.5 kilometres (4.0 mi) northwest of Anstruther. The name is spelled Pittarthie and Pittairthie in extant records. The ruins are protected as a scheduled monument, and as a category B listed building.The present house was built for James Monypenny of Pitmilly circa 1580. The King confirmed to Andrew Logan of Easter Granton and his heirs, "the lands of Pittarthie with certain others, including the fortalice, manor-place, etc., which had formerly been held of the Archbishop of St. Andrews by James Monypenny of Pitmelie and had been resigned by him in favour of the said Andrew". The estate was bought by the Bruces circa 1636 or 1644, and the house was remodeled by William Bruce of Pittarthie in 1653. In 1654, William Bruce inherited the property from his father, Andrew Bruce. In 1882, the house, called "Pittairthie Castle", was described as "a roofless ruin in the southwest of the parish, partly very ancient ... partly a structure of 1653; and in its oldest portion consists of a large square tower, with vaults beneath". The description "partly very ancient" may have resulted from observation of the coarser masonry at the bottom of the south wall, mentioned in the later description, which would suggest an even earlier structure had stood on the site. The estate dates from the 14th century according to one report, which also states that the property passed to the Hannays of Kingsmuir sometime after about 1700.