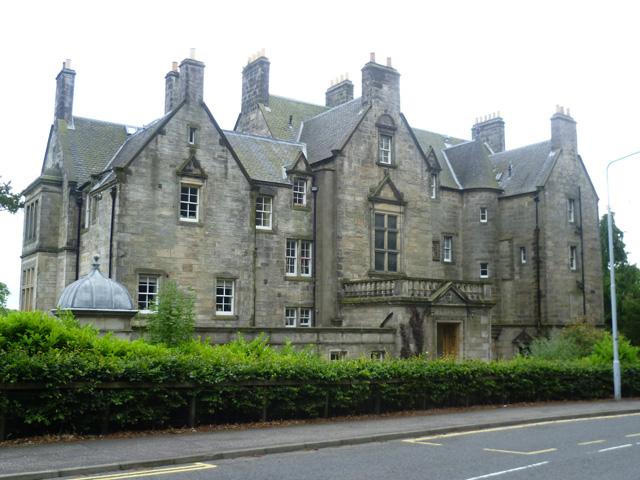 Location: Dunfermline, Fife, Scotland.
Built: 17th century.
Condition: Intact.
Ownership / Access: --.
Notes: Pitreavie Castle is a country house, located between Rosyth and Dunfermline in Fife, Scotland. It was built in the early 17th century, and was extensively remodelled in 1885. The house remained in private hands until 1938, when it was acquired by the Air Ministry, and became RAF Pitreavie Castle. The RAF station closed in 1996, and the building was converted into residential apartments. The Pitreavie estate was owned by Lady Christina Bruce, sister of Robert the Bruce, in the 14th century, and by the early 17th century, it was owned by the Kello (or Kellock) family. Henry Wardlaw of Balmule (later Sir Henry Wardlaw, 1st Baronet of Pitreavie) bought the estate in 1608 for 10,000 merks Scottish. Wardlaw was Chamberlain to Queen Anne, wife of James VI of Scotland. When James acceeded to the English throne in 1603 and travelled south to London, he left Dunfermline Palace in Wardlaw's care. Henry Wardlaw became a Baronet of Nova Scotia in 1631, and died in 1637, succeeded by his eldest son, also Henry. Wardlaw's granddaughter, Elizabeth Wardlaw, was the reputed author of the poem Hardyknute and the ballad Sir Patrick Spens. Wardlaw began to construct the house in 1615.It was originally built to a U-shaped plan, with a symmetrical layout comprising a rectangular main body about 20 metres (66 ft) long, two short wings projecting to north, and spiral staircases rising up both interior angles. The roof originally had crow steps on the gables and dormer windows, with the only entrance on the inner side of the west wing: a matching door in the east wing led down to a blind cellar. There were only small windows on the ground floor. Pitreavie is considered to be an important example of an early 17th-century symmetrically-planned house, in the style of Sir James Murray, the King's Master of Works, and is similar to his Baberton House of the 1620s. The grounds were planted as a wilderness in the late 17th century, with acres of ash, birch and elm trees. During the invasion of Scotland by Oliver Cromwell, the Battle of Pitreavie was fought nearby on 20 July 1651, between an English force commanded by Colonel Robert Overton and a Scottish force, including some 800 Highlanders from the Clan Maclean. After the battle, which was a decisive victory for the Cromwellian forces (contemporary reports speak of 2,000 Scots killed and 1,600 captured, all for the loss of 8 of Overton's troops), a group of Macleans sought refuge in the house, but cursed the Wardlaw family when they were refused sanctuary.

How To Get To Pitreavie Castle (Map):