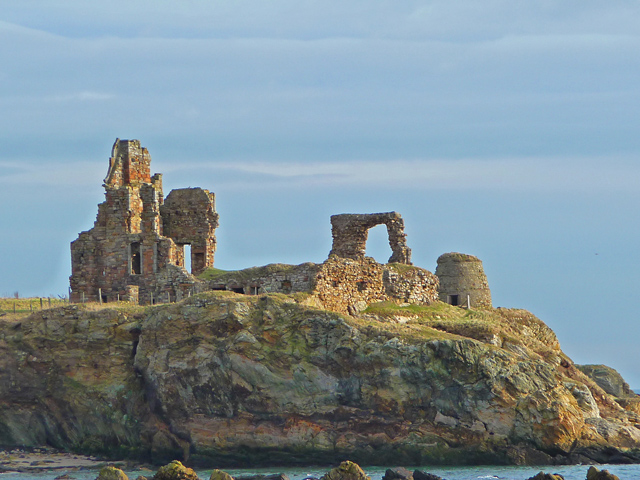 Location: St Monans, Fife, Scotland.
Built: 13th century.
Condition: Ruins.
Ownership / Access: Private.
Opening Times: Check their website for more info.
Price of Admission: Check their website for more info.
Notes: Newark Castle is a ruin located just outside the town of St Monans, on the east coast of Fife, Scotland. Building on the site probably dates back to the 13th century at which time the Scottish king Alexander III (1241 - 1286) spent some of his childhood there. Since that time, the site has passed through several rebuilding phases, and it is most likely that the ruins currently visible are the remains of buildings constructed under the ownership of David Leslie in the 17th century and the Sandilands family who owned the castle since the 15th century when they gained the estate through marriage. Leslie was a prominent figure in the English and Scottish Civil Wars, becoming Lord Newark after the wars. The castle attracted the attention of Sir William Burrell, the Glasgow shipping magnate and collector of art and antiques, in the late 19th Century when Sir Robert Lorimer produced a plan for its restoration. The scheme never went ahead as the owner of the site, a Mr Baird of Elie, refused to sell. The castle has been known by several names, including Inverie, St Monans and St Monance (the latter being a mediaeval form of the possessive St Monan's).

How To Get To Newark Castle (Map):