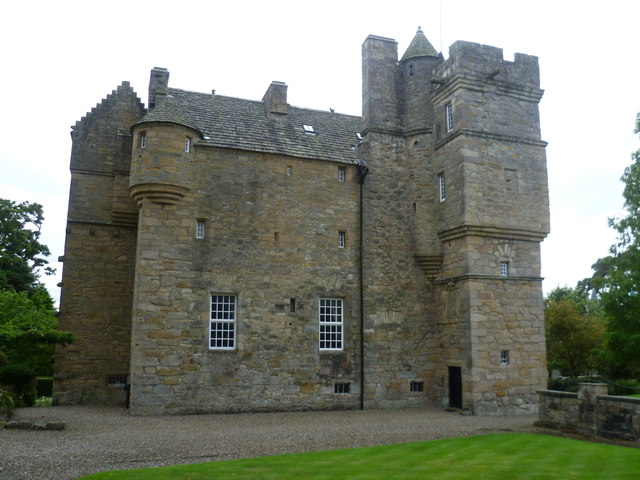 Location: Dunfermline, Fife, Scotland.
Built: 16th century.
Condition: Restored.
Ownership / Access: Private.
Notes: Fordell Castle is a restored 16th-century tower house, located 1.25 miles (2.01 km) north-west of Dalgety Bay and 2 miles (3.2 km) east of Dunfermline, in Fife, Scotland. The earliest charter in the Henderson of Fordell papers dates from 1217, when Richard, son of Hugh de Camera, with consent of his wife & son, grants small parts of the lands of Fordal to the Abbey of Inchcolm. By 1240, William de Hercht had the lands of Fordell, when there was a dispute with Inchcolm over their respective boundaries. No further charters are known to survive until the 15th century. Part of the lands of Fordell were already in the hands of John Henrisoun of Fordell, Sergeant of the Barony, by 1465, when he was witness to a charter, later confirmed by the crown in 1488-9. A further portion was bought from Alexander Drummond of Ardmore on 6/3/1510-11, which sasine was confirmed by King James IV in 1511, and the castle was built in 1567 on the site of an earlier structure. Mary, Queen of Scots, stayed here when Marion Scott, one of her ladies-in-waiting, married George Henderson, the laird. The castle was destroyed by fire, but rebuilt c.1580. The castle was damaged again by Oliver Cromwell's army in 1651. From 1664 to 1833 the Hendersons were baronets. In the 19th century, the family built a new mansion nearby, but kept the castle in good repair, including rebuilding the north front in 1855 (designed by Robert Hay). In 1866, the estate passed by marriage to Hew Duncan, second son of the Earl of Camperdown.The mansion was demolished in the 20th century, and there is now little visible evidence of its existence, other than the remains of stonework, foundations and the overgrown detritus of human habitation. Pine woodland has wholly taken over its former location, although a stone bridge over the former railway shows the position of the entrance, from the south-east, and the formal carriage-turning circle is still visible as a clearing. The ruins of Fordell Castle were purchased by the lawyer and Conservative politician Sir Nicholas Fairbairn (1933-1995) for one hundred pounds sterling. The castle was restored and used as a private residence by Sir Nicholas and his wife Lady Sam Fairbairn (1942-2002), who continued to live there until 1997 when it was sold on to a local veterinary surgeon, before being sold on again to multi-millionaire businessman Andrew Berry. In November 2007, Fordell Castle was sold for 3,850,000 to an undisclosed buyer, making it the fifth-highest-priced home ever sold in Scotland. The Castle remains a private residence, albeit a second home, and is a category A listed building. Following his death in 1995, Nicholas Fairbairn was laid to rest in the crypt below the Chapel of St Theriot in the castle grounds. Andrew Berry's family initials have been added to the stonework surrounding the Chapel's entrance.