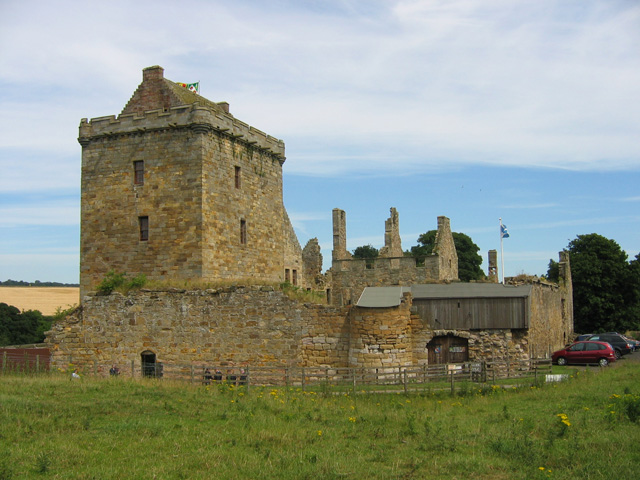 Location: Milton of Balgonie, Fife, Scotland.
Built: 14th century.
Condition: Ruins.
Ownership / Access: --.
Opening Times: Check their website for more info.
Price of Admission: Check their website for more info.
Notes: Balgonie Castle is located on the south bank of the River Leven near Milton of Balgonie, 3.5 kilometres (2.2 mi) east of Glenrothes, Fife, Scotland. The keep dates from the 14th century, and the remaining structures were added piecemeal until the 18th century. The keep has been recently restored, although other parts of the castle are roofless ruins.The castle is still entered via the 15th century gatehouse. This is semi-ruinous above ground level, but a guardroom and prison can be seen within. The gate opens onto a courtyard, containing a well, around which the buildings are arranged. The ground and first floors of the keep are vaulted, the first floor containing the hall, which unusually had no great fireplace. This would originally have been entered via a moveable timber stair, prior to the construction of the present stone stair. Above the hall are two further floors, each with a fireplace and connected by a turnpike stair. The keep is topped by a pitched roof with crow stepped gables. Outside, the parapet walk and cannon spouts are of 17th-century origin, and contemporary with the enlarged windows. Some of the smaller trefoil-headed original windows survive. In the basement of the north range is the vaulted chapel, although the remainder of the range, and the east buildings, are roofless. Walls and chimney stacks remain. The remains of earlier buildings within the courtyard were uncovered during excavations in 1978. It appears that these were demolished in the early 17th century to allow rebuilding. Beyond the castle walls, the extensive boundary walls of the deer park survive, although damaged in parts. Large mature trees remain from the 17th century landscaping.Several hauntings have been reported within the castle. One spectre, nicknamed 'Green Jeanie', is said to be the ghost of one of the Lundie occupants. A 17th-century soldier, a dog, and a hooded man have also been claimed to be seen. A skeleton was found in the floor of the great hall, during works in 1912.

How To Get To Balgonie Castle (Map):