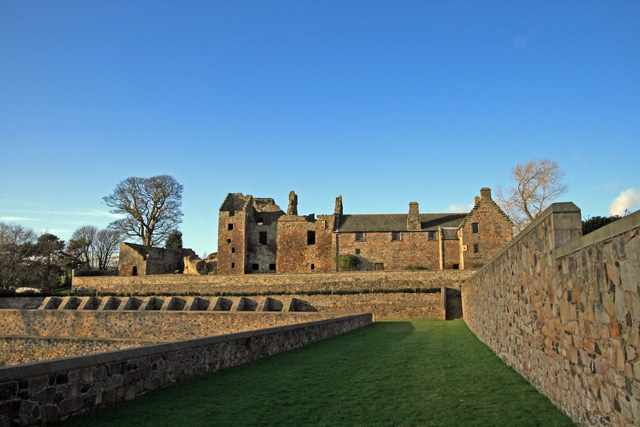 Location: Aberdour, Fife, Scotland.
Built: 1200.
Condition: Ruins.
Ownership / Access: Historic Scotland.
Opening Times: Check their website for more info.
Price of Admission: Check their website for more info.
Notes: Aberdour Castle is located in the village of Easter Aberdour, Fife, Scotland. Parts of the castle date from around 1200, making Aberdour one of the two oldest datable standing castles in Scotland, along with Castle Sween in Argyll, which was built at around the same time. The earliest part of the castle comprised a modest hall house, on a site overlooking the Dour Burn. Over the next 400 years, the castle was successively expanded according to contemporary architectural ideas. The hall house became a tower house in the 15th century, and was extended twice in the 16th century. The final addition was made around 1635, with refined Renaissance details, and the whole was complemented by a walled garden to the east and terraced gardens to the south. The terraces, dating from the mid-16th century, form one of the oldest gardens in Scotland, and offer extensive views across the Firth of Forth to Edinburgh. The castle is largely the creation of the Douglas Earls of Morton, who held Aberdour from the 14th century. The earls used Aberdour as a second home until 1642, when their primary residence, Dalkeith House, was sold. A fire in the late 17th century was followed by some repairs, but in 1725 the family purchased nearby Aberdour House, and the medieval castle was allowed to fall into decay. Today, only the 17th-century wing remains roofed, while the tower has mostly collapsed. Aberdour Castle is now in the care of Historic Scotland, and is open to the public all year.

How To Get To Aberdour Castle (Map):