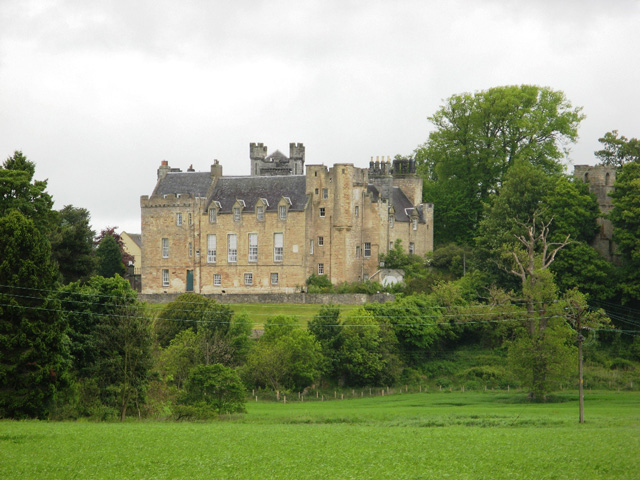 Location: River Forth, Falkirk, Scotland.
Built: 16th century.
Condition: Occupied.
Ownership / Access: Private.
Opening Times: Check their website for more info.
Price of Admission: Check their website for more info.
Notes: Airth Castle is a castle overlooking the village of Airth and the River Forth, in the Falkirk area of Scotland. The castle is currently operated as a hotel and spa. According to an account attributed Blind Harry, in 1298 a previous wooden fortification on this site was attacked by William Wallace, in order to rescue his imprisoned uncle, a priest from Dunipace. A later castle was destroyed after the defeat of King James III at Sauchieburn in 1488. The south west tower is the earliest part, dating to the period immediately thereafter. An extension was added on the east side in the mid 16th century.Airth Castle was owned by the Bruces, Jacobite sympathizers who were forced to sell after the failure of the 1715 rebellion. The castle is a major historic building, and retains much medieval fabric, and is designated as a Category A listed building by Historic Scotland. Within the castle grounds stand the ruins of the former parish church of Airth, a building, now roofless, of various periods, with substantial parts dating from the Romanesque period, and quire steeple and north aisle added by John Milne the royal master mason in 1647. Access to the kirk is restricted for safety reasons. The graveyard includes a number of cast iron 'mortsafes', large coffin shaped containers used to thwart the plans of the body snatchers in the early 19th century.

How To Get To Airth Castle (Map):