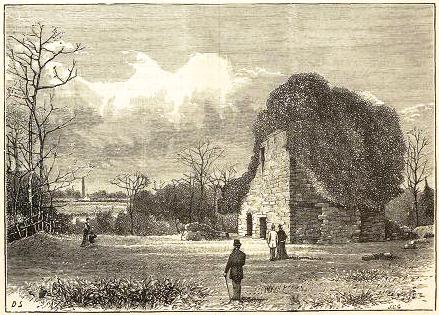 Location: Edinburgh, Scotland.
Built: 15th century.
Condition: Ruined.
Ownership / Access: --
Notes: Lennox Tower is a ruined fifteenth-century tower house at Lymphoy, near the Water of Leith, between Balerno and Currie, 11 kilometres (6.8 mi) southwest of Edinburgh, Scotland. The tower was built by the Earls of Lennox, who belonged to the Stewart family. Mary, Queen of Scots and Regent Morton visited the castle, while James VI used it as base for hunting. It was later acquired by George Heriot, the goldsmith and founder of George Heriot's School. The castle became so ruinous that at one stage it became a rock garden.