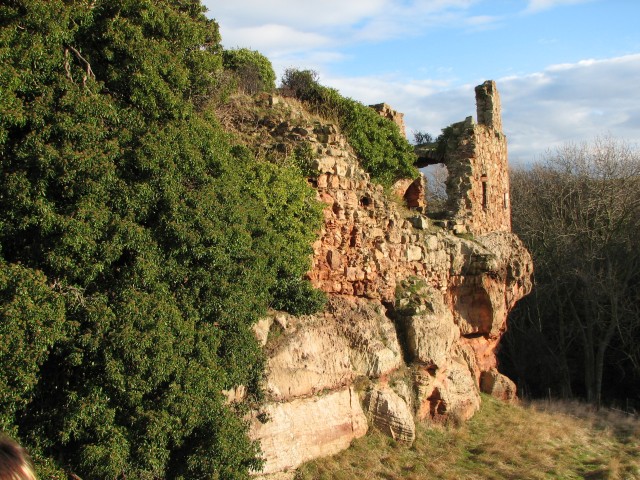 Location: Innerwick, East Lothian, Scotland.
Built: 14th century.
Condition: Ruin.
Ownership / Access: --
Notes:Innerwick Castle is a ruined castle in East Lothian, Scotland, near the village of Innerwick, 5 miles (8.0 km) from Dunbar, on the Thornton Burn, and overlooking Thornton Glen. The castle, built in the 14th century on "the edge of a precipitous glen", was a stronghold of the Stewarts and of the Hamilton family. It was extended several times, but was captured and destroyed by Edward Seymour, 1st Duke of Somerset in 1548. Both Innerwick and Thornton castles had been of strategic importance for guarding routes from the south. Innerwick Castle stands within the Barony of Innerwick. The most recent Baron of Innerwick was Colonel Victor Charles Vereker Cowley of Crowhill (1918-2008). Currently, Thornton Glen is part of the Crowhill Estate and is managed by the Scottish Wildlife Trust. The glen is considered important for the presence of ferns that are rare in Scotland. The remains of the castle are on top of a crag which is popular with climbers.

Innerwick Castle On Wikipedia
Gazetteer for Scotland entry on Innerwick and the Castle
Vision of Britain website entry for Innerwick and its castle
Google Books:History of the county of Ayr p. 230 by James Paterson
Google Books: Black's Picturesque Tourist of Scotland by Adam and Charles Black (Firm), p.155