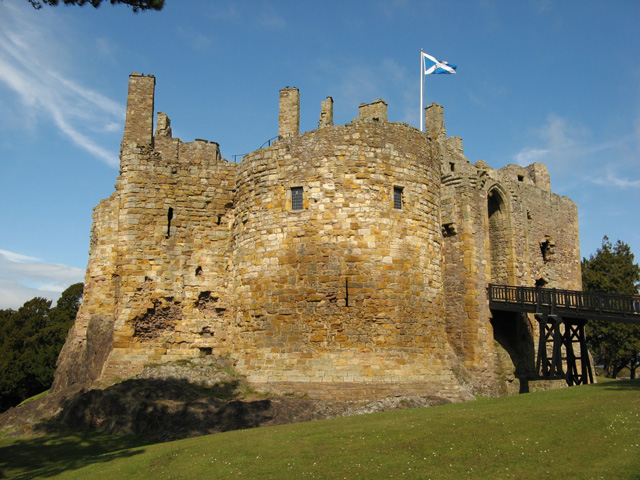 Location: Dirleton, East Lothian, Scotland.
Built: 13th century.
Condition: Partly Ruined.
Ownership / Access: Historic Scotland.
Opening times: Partly Ruined.
Price of admission: Partly Ruined.
Notes: Dirleton Castle is a medieval fortress in the village of Dirleton, East Lothian, Scotland. It lies around 2 miles (3.2 km) west of North Berwick, and around 19 miles (31 km) east of Edinburgh. The oldest parts of the castle date to the 13th century, and it was abandoned by the end of the 17th century. Begun in around 1240 by John De Vaux, the castle was heavily damaged during the Wars of Scottish Independence, when it was twice taken by the English. In the 14th century, Dirleton was repaired by the Haliburton family, and it was acquired by the Ruthvens in 1505. The Ruthvens were involved in several plots against Mary, Queen of Scots, and King James VI, and eventually forfeited the castle in 1600. Dirleton ceased to be a residence, although Oliver Cromwell was forced to besiege the castle to flush out a band of "mosstroopers" (marauders), during the Third English Civil War in 1650. The damaged castle was then acquired by John Nisbet, Lord Dirleton, who decided to build a new country house on the nearby Archerfield Estate. The Nisbet family of Dirleton continued to maintain the castle's gardens, before handing Dirleton into state care in 1923. The ruins and gardens are now maintained by Historic Scotland. Dirleton Castle stands on a rocky outcrop, at the heart of the rich agricultural lands of the barony of Dirleton, and guards the coastal approach to Edinburgh from England, via the port of North Berwick. The ruins comprise a 13th-century keep, and a 16th-century house which the Ruthvens built adjacent. Only the basement levels survive of the 14th- and 15th-century additions built by the Haliburtons, although these comprised a large hall and tower house along the east range. Other buildings within the courtyard have also been demolished. Surrounding the castle are gardens, which may have been first laid out in the 16th century, although the present planting is largely of the 20th century. The garden walls enclose a 16th-century doocot, or pigeon house.

How To Get To Dirleton Castle (Map):