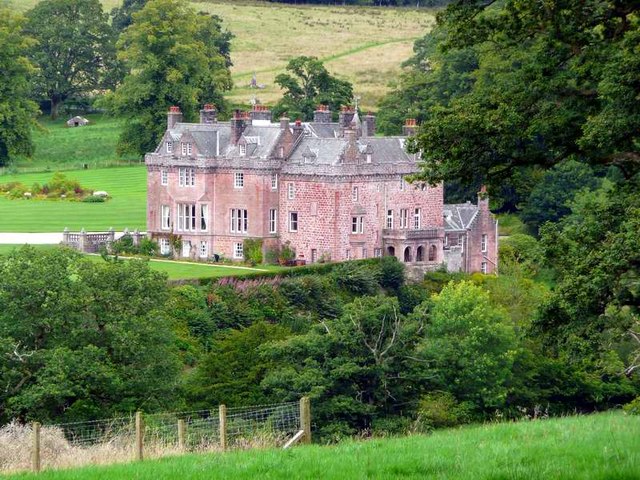 Location: Sorn, East Ayrshire, Scotland.
Built: 1409.
Condition: Expanded 1909, in use as a hotel.
Ownership / Access: Private.
Notes: Sorn Castle is located by the River Ayr just outside the village of Sorn in East Ayrshire, Scotland. The castle comprises a medieval tower house, which was extended over the years, and remodelled in the Scots Baronial style by David Bryce in the 1860s. The castle is protected as a category A listed building. A tablet on the castle wall states "Extant AD 1409, Added to AD 1783, Restored AD 1865, Enlarged AD 1909". The original three-storey tower house is located at the south-west of the present building, and was constructed in the 15th century, or possibly earlier. This tower was extended westwards in the 16th-century. Additions were made in the late 18th century in a castellated style. In the 1860s the Somervell family owned the castle, and commissioned David Bryce to remodel the building. Sorn Castle was bought in 1908 by Thomas W. McIntyre, who commissioned a new entrance from architect Henry Edward Clifford and carried out internal remodelling. The castle remains privately owned, and is operated as a hotel.

How To Get To Sorn Castle (Map):