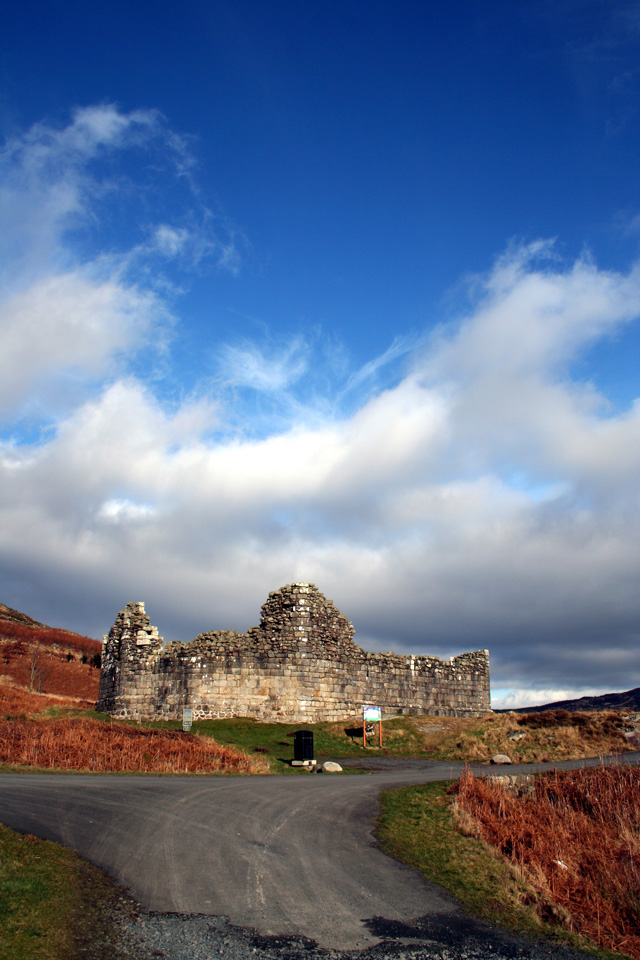 Location: Loch Doon, East Ayrshire, Scotland.
Built: Late 13th century (rebuilt 1930s).
Condition: Ruined.
Ownership / Access: Historic Scotland.
Notes: Loch Doon Castle was a castle that was located on an island within Loch Doon, Scotland. The castle was dismantled and rebuilt on the side of the loch after the loch water level was raised in the 1930s for a hydro electric scheme. Loch Doon Castle was built in the late 13th century on an island within Loch Doon. The castle consists of an eleven-sided curtain wall. The castle was in the hands of the Earls of Carrick in the 13th century. During the Scottish Wars of Independence it was held by the governor Sir Gilbert de Carrick (Gille Brighde) who surrendered it to the English. It was soon recovered by the forces of King Robert I of Scotland. The castle fell later to the English and was recaptured in 1314. The castle was besieged in 1335. During the 15th century, the castle was in the hands of the Kennedy family. The castle was taken from them by William Douglas, 8th Earl of Douglas after a siege in 1446. Having been given back to the Kennedy family, the castle was again taken from them by William Crauford of Lefnoris in 1511. The castle was destroyed in the 16th century by King James V of Scotland as part of a general policy of reducing the power of the barons of Galloway.

How To Get To Loch Doon Castle (Map):