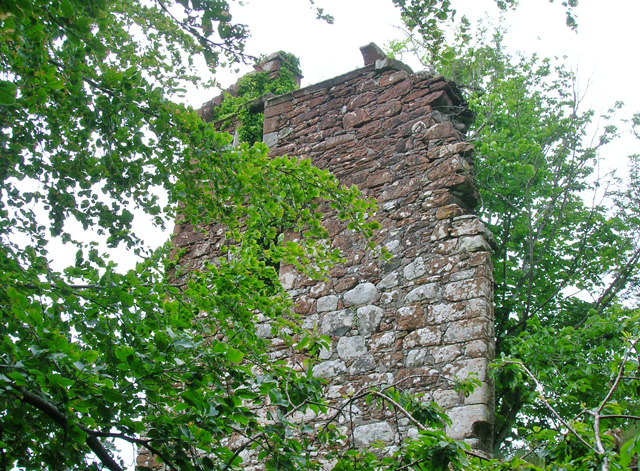 Location: Mauchline, East Ayrshire, Scotland.
Built: 17th Century.
Condition: Ornamental ruins.
Ownership / Access: Private.
Notes: The remains of the old castle of Kingencleugh or Kingenclough lies close to east of the town of Mauchline, East Ayrshire, in the old Barony of Mauchline off the A76. The castle is Category B listed. From the remains, this appears to have been built as a dwelling with defence as a secondary consideration. John Knox is said to have visited it in 1556. Kingencleugh was built as one of several castles built as border markers for the Campbell feus in the area. Kingencleugh latterly became part of the Ballochmyle estate. The present castle was built around 1620 to replace the older fortification that Knox would have known. The castle was abandoned once the new house was built. The Campbells held the property until the end of the 18th century. Kingencleugh was the residence successively of Hugh and Robert Campbell, both ardent reformers. George Wishart and John Knox were entertained here and Knox also preached at this castle when he visited Mauchline in 1556. On his death bed it was to Robert Campbell that Knox said: "I rely on you becoming to them (his wife and children) as a husband and a father in my room." Dobie records that John Knox was conducted by Lochhart of Bar and Campbell of Kineancleugh to Kyle, the ancient recaptacle of the Scottish Lollards, where there were a number of adherents to the reformed doctrine. He preached in the houses of Bar, Kineancleugh, Carnell, Ochiltree, and Gadgirth, and in the town of Ayr. In several of these places he also dispensed the Sacrament of Our Lord's Supper.