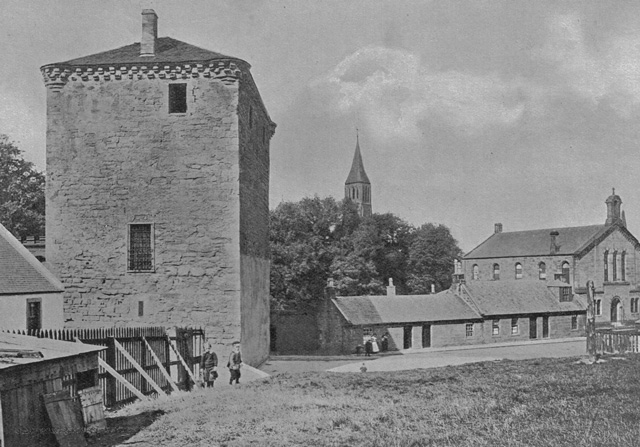 Location: East Ayrshire, Scotland.
Built: 15th century.
Condition: In use as a Masonic Lodge with a museum.
Ownership / Access: Masonic Lodge.
Notes: Probably dating from the 15th century this five storeyed red sandstone tower castle still stands as a prominent feature (NS 505 360) on a rocky knol close to the Burn Anne, within the towns boundaries. It was also known as Lockhart's Tower and was built to control the nearby access points up the Irvine Valley. William Wallace is said to have taken refuge from pursuing English soldiers within the tower, eventually escaping siege by climbing down an overhanging tree. It has a practical, if not authentic, roof which does not hide a view of the continuous corbelling of the parapet. The bottom section of the four angle towers are discernible. The castle was built for the Lockart family who held the Barony of Galston; enthusiastic opponents of the Catholic faith. In 1670 the property was purchased by the Campbells of Cessnock Castle nearby. The castle is now used as a Masonic Lodge and is open to the public on occasions. In August 1528, James Campbell of Lochlee abducted Alexander Pawtoun from Mauchline and imprisoned him for 5 days in the dungeon (spelunca) of the Tower of Galston in order to extort the sum of 20. In an old charter of 12 March 1438, John Lockhart, Lord of Barr, provides for an annual rent to be paid to the chaplain for saying three masses annually for the repose of his soul at the altar of the church of Saint Peter in Ardrossan. The renowned reformer and Protestant martyr, George Wishart, preached at the castle in 1545 and in 1556 John Knox also preached here; both were under the protection of John Lockart of Barr and his fellow reformers.