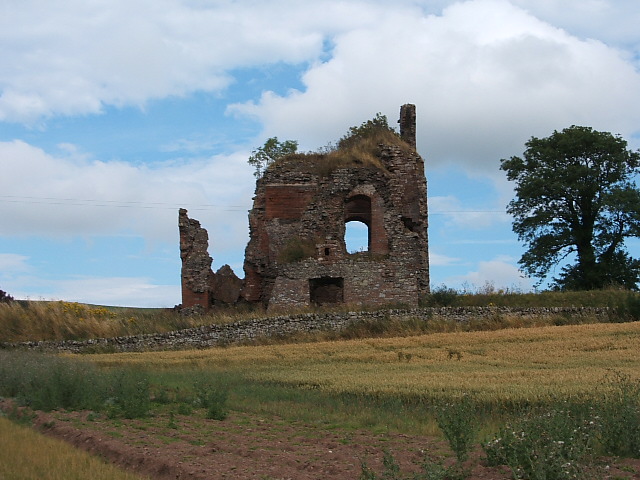 Location: Torthorwlad, Dumfries and Galloway, Scotland.
Built: 14th century.
Condition: Ruined.
Ownership / Access: Private.
Notes: Torthorwald Castle is a large ruined rectangular tower at the center of the village of Torthorwald just outside Dumfries in south west Scotland. The first castle on the site was an earthwork motte-and-bailey built in the 12th century. The earliest building which forms part of the current ruins was built in the 14th century. Torthorwald Castle was originally owned by Sir David Torthorwald in the 13th Century. The castle has served as a stronghold for the Kirkpatrick and Carlyle families. It was first handed to the Kirkpatricks and then in 1418 to the Carlyles. In 1544 it was attacked by Michael Lord Carlyle and sacked, in his raid against his sister-in-law, Jonet Scrimgeour. She was reinstated by Regent Arran and the legal settlement includes a list of the contents of the Castle in the Scots language, and the farmstock in Latin. In 1609 the castle passed by marriage to the Douglases of Parkhead. The basement and first floor hall of this tower are vaulted and in one corner is a turnpike stair that leads to the upper floors. It appears that the original entrance was on the first floor.