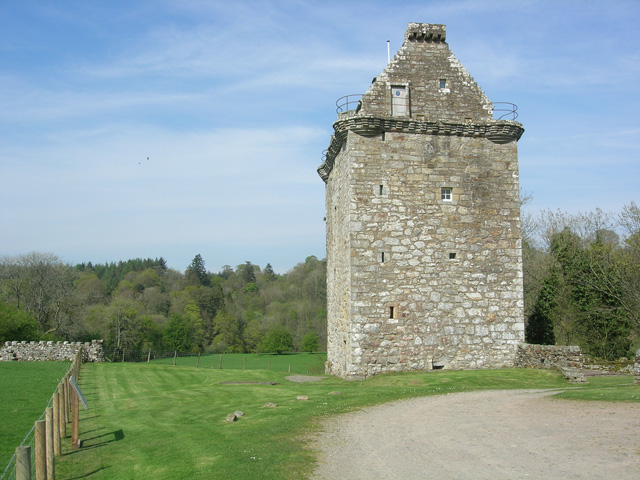 Location: Canonbie, Dumfries and Galloway, Scotland.
Built: 16th century.
Condition: Restored as a residence.
Ownership / Access: Private.
Opening Times: Check their website for more info.
Price of Admission: Check their website for more info.
Notes: Gilnockie Tower is a 16th-century tower house, located at the hamlet of Hollows, 2.3 km north of Canonbie, in Dumfries and Galloway, south-west Scotland. The tower is situated on the west bank of the River Esk. It was originally known as Hollows Tower. Gilnockie Castle is a separate, but nearby site.Hollows was built around 1520 by Johnnie Armstrong, famous Border outlaw and younger brother of Thomas Armstrong of Mangerton. In 1528, the tower was burned by Sir Christopher Dacre, English Warden of the Western Marches, and in 1530 Johnnie and 50 followers were hanged by James V, after being tricked into joining a hunting party, an event recorded in the ballad "Johnnie Armstrong". The tower was rebuilt, but was damaged again by English raids in the 1540s, only to be rebuilt again with a new parapet walk, and a beacon stance on the gable.

How To Get To Gilnockie Tower (Map):