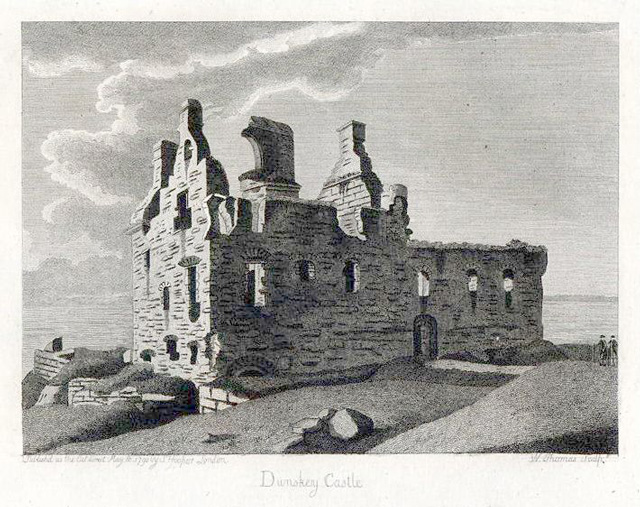 Location: Stranraer, Dumfries and Galloway, Scotland.
Built: 16th century.
Condition: Ruined.
Ownership / Access: Private.
Notes: Dunskey Castle is a ruined, 12th century tower house or castle, located 0.5 miles (0.80 km) south of the village of Portpatrick, Rhinns, Wigtownshire, on the south-west coast of Scotland. Dunskey Castle is a scheduled monument, a 'nationally important' archaeological site or historic building, given protection against unauthorized change. It is also a class A listed building.The three-storey L-plan structure is sited on a promontory, with a rock-cut ditch, 15 metres (49 ft) wide by 2.5 metres (8.2 ft) deep, defending the only access, from the north-east. The castle measures 30 by 14.3 metres (98 by 47 ft), with walls 1.5 metres (4.9 ft) thick, although the building is now a roofless shell. The north-east wing is of a later date, and the foundations of a south range are visible. Near the castle are the remains of a watchtower, 7 metres (23 ft) square, built on the cliff edge. Timothy Pont's map drawn c.1580-1590 shows Dunskay Castle with 2 watchtowers on the cliff edge fronting the sea.[6] Francis Grose's drawing dated 10 May 1790 shows the ruins of the foundations and sea-wall on the south and what looks to be the large entrance door in the southern corner from where the inside staircase may have led straight up to the new "Hall" built c.1520. Grose's drawing shows Ireland (approx. Island Magee / Larne area) in the background across the sea. In virtue of a tradition preserved in the Book of Leinster, W. J. Watson identifies the place named in it as Port Rig (Portrie, Portree) with the later Portpatrick, connecting 'Rig' with Reregonium, which he regards as the royal town of the Novantae and places in this region. He would thus carry Portpatrick's history back to the first century of our era, while he dates a rather later reference to about AD 250. Portpatrick was known as the port of Castle Dunskey. Dunskey is undoubtedly romantic. It was a location for the 1951 film "Kidnapped" of Robert Louis Stevenson's novel. The owner, Dieter Stanzeleit, restricts public access to the castle.

How To Get To Dunskey Castle (Map):