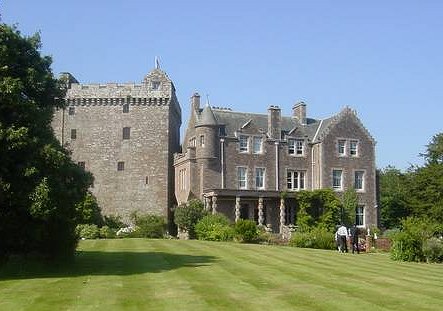 Location: Clarencefield, Dumfries, Scotland.
Built: 15th century.
Condition: Restored as a hotel.
Ownership / Access: Private.
Opening Times: Check their website for more info.
Price of Admission: Check their website for more info.
Notes: Comlongon Castle is a tower house dating from the 15th century. It is located 1 km west of the village of Clarencefield, 10 km south-east of Dumfries, in south west Scotland. The original tower was extended by the addition of a 19th-century baronial style mansion. The castle and mansion are now a hotel. Thomas Randolph, 1st Earl of Moray granted the lands of Comlongon, in the early 14th century, to his nephew William de Moravia, ancestor of the Murrays of Cockpool. His descendant Cuthbert of Cockpool (d.1493) built Comlongon Castle in the later part of the 15th century, to replace the Murrays' earlier castle of Cockpool, of which only earthworks remain at Cockpool Farm, to the south west of Comlongon. His son John Murray (d. c.1527) was created Baron Cockpool in 1508. Descendants of the Murrays were later created Viscounts Stormont in 1621, and Earls of Mansfield in 1776, and Comlongon was part of the Earl's estate until 1984. The castle is reportedly haunted by the ghost of Lady Marion Carruthers who took her own life by leaping from the lookout tower.

How To Get To Comlongon Castle (Map):