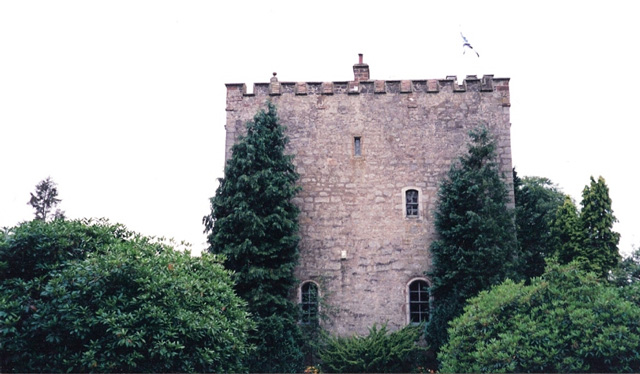 Location: Thornhill, Dumfries and Galloway, Scotland.
Built: 14th century.
Condition: Still in use as a residence.
Ownership / Access: Private.
Notes: Closeburn Castle is a tower house, probably of the 14th century, but possibly older, and is one of the oldest continually inhabited houses in Scotland. The castle is located 1 km east of the village of Closeburn, and 2 km south-east of Thornhill, in Dumfries and Galloway, south-west Scotland.The Kirkpatrick family was confirmed in their lands of Closeburn in 1232 by Alexander II. The tower house was probably built in the late 14th century, although some sources give a date as early as 1180 or as late as 1420. Sir Roger de Kirkpatrick was with Robert the Bruce at Dumfries in 1306, and assisted in the murder of John "the Red" Comyn. His son, also Sir Roger, commanded a force which recaptured Caerlaverock and Dalswinton castles from the English in 1355. He was then murdered by Sir James Lindsay at Caerlaverock in 1357. In 1685 the Kirkpatricks' loyalty to Charles I was rewarded with a baronetcy. In the 17th century the Kirkpatricks moved out of Closeburn to an adjacent, newly built manor house. However, this burned down in 1748, with the castle sustaining some damage. Renovations were made to the castle, and the family moved back in. The Kirkpatrick family finally sold Closeburn in 1783 to a local minister, Dr James Stewart-Menteith. It has since changed hands several times, but is still occupied as a dwelling house.