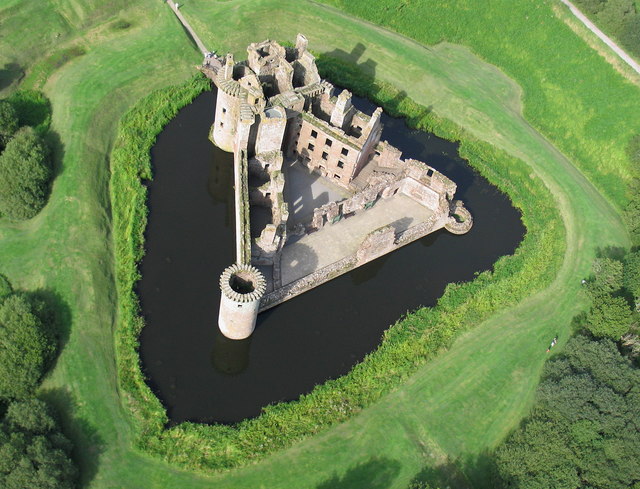 Location: Dumfries, Dumfries and Galloway, Scotland.
Built: 13th century.
Condition: Ruined.
Ownership / Access: Historic Scotland.
Opening Times: Check their website for more info.
Price of Admission: Check their website for more info.
Notes: Caerlaverock Castle is a moated triangular castle first built in the 13th century. It is located on the southern coast of Scotland, 11 kilometres (6.8 mi) south of Dumfries, on the edge of the Caerlaverock National Nature Reserve. Caerlaverock was a stronghold of the Maxwell family from the 13th century until the 17th century when the castle was abandoned. It was besieged by the English during the Wars of Scottish Independence, and underwent several partial demolitions and reconstructions over the 14th and 15th centuries. In the 17th century, the Maxwells were created Earls of Nithsdale, and built a new lodging within the walls, described as among "the most ambitious early classical domestic architecture in Scotland". In 1640 the castle was besieged for the last time and was subsequently abandoned. Although demolished and rebuilt several times, the castle retains the distinctive triangular plan first laid out in the 13th century. Caerlaverock Castle was built to control trade in early times. Today, the castle is in the care of Historic Scotland and is a popular tourist attraction. It is protected as a scheduled monument, and as a category A listed building.The history of its builders can be traced to Undwin and his son Maccus in the 11th century; Maccus gave his name to the barony of Maccuswell, or Maxwell. His grandson, John de Maccuswell (d. 1241), was first Lord Maxwell of Caerlaverock. The Baronies of Maxwell and Caerlaverock then passed down through the male line, sometimes collaterally. Robert de Maxwell of Maxwell, Caerlaverock and Mearns (d. 1409) rebuilt Caerlaverock castle and was succeeded by Herbert Maxwell of Caerlaverock (d. 1420)The present castle was preceded by several fortifications in the area: a Roman fort on Ward Law Hill and a British hill fort that was in use around 950. The earliest mention of the lands of Caerlaverock is around 1160, when they were granted to the monks of Holm Cultram Abbey.Around 1220 Alexander II of Scotland granted the lands to Sir John Maxwell, making him Warden of the West March. Sir John Maxwell also served as Chamberlain of Scotland from 1231-1233, and began work on the first castle at Caerlaverock. This castle was square in shape and was one of the earliest stone castles to be built in Scotland. It had a moat with a bridge facing north. Only the foundations and remains of a wooden enclosure around it remain. This early castle may have been incomplete when it was abandoned in favour of a rock outcrop some 200 metres (660 ft) to the north. It was here that Sir John's brother Sir Aymer Maxwell began construction of the present castle. Sir Aymer also served as Chamberlain in 1258-1260, and was Justiciar of Galloway in 1264. In the 1270s the "new" castle was completed, and Herbert Maxwell, nephew of John Maxwell, occupied it.When the moat around the second castle was dug, the quarrying was probably a source of building stone for the castle. While the gatehouse stands on natural rock, the rest of the castle was built on a clay platform created especially for the castle.

How To Get To Caerlaverock Castle (Map):