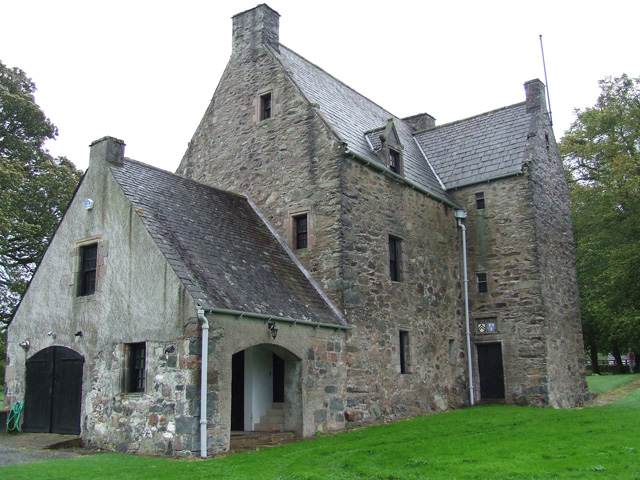 Location: Balmaclellan, Kirkcudbrightshire, Scotland.
Built: 1648.
Condition: Restored 1971.
Ownership / Access: Private.
Notes: Barscobe Castle is a 17th-century tower house in Balmaclellan, Kirkcudbrightshire, Scotland. It is a typical house of a country laird, and according to a panel above the entrance, was built in 1648. The L-plan tower was constructed using stone taken from Threave Castle. The main block is three storeys high with the stair wing one storey higher. The gables have a modification of crowsteps found only in Galloway. It is a fine example of a mid-17th-century house which was unoccupied for many years until 1971 when it was restored. It has a modern byre (barn) attached, which has been converted into a garage. Barscobe Castle is a category A listed building. Above the entrance to Barscobe Castle is an armorial panel bearing the arms of Maclellan and Gordon with the initials of William Maclellan, who built the castle, and his wife Mary Gordon, the natural daughter of Sir Robert Gordon of Lochinvar, 4th Viscount Kenmure and Commissioner of War for the Stewartry from 1645-1648. When William Maclellan died in 1654, his eldest son Robert Maclellan, an ardent Covenanter, succeeded to the castle and lands of Barscobe. The present owners are campaigning against the construction of a wind farm on nearby Blackcraig. Barscobe Castle has been inhabited since November 2011 by Stewart Gibson and Lorraine Belshaw and as of 2015 was running as small seasonal BED AND BREAKFAST.