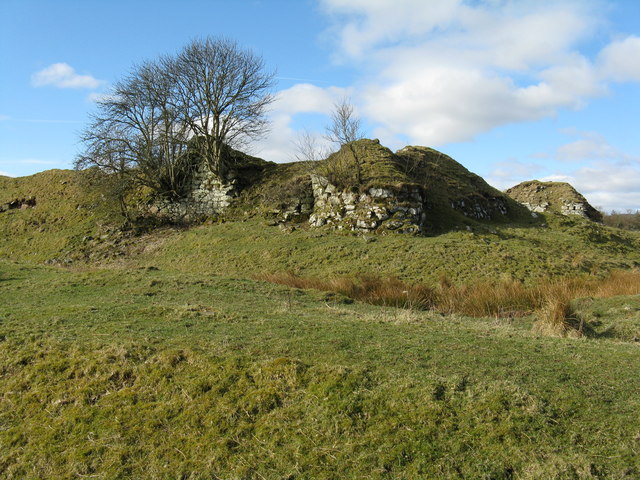 Location: Near Moffat, Dumfries and Galloway, Scotland.
Built: 14th century.
Condition: Ruined..
Ownership / Access: Private.
Notes: Auchen Castle not to be confused with the current Auchen Castle Hotel, is a ruined 13th Century castle situated near Moffat, Dumfries and Galloway. Dating back to 1220, the original castle was probably built by Sir Humphrey de Kirkpatrick when he was Senestal of Annandale. The castle was in the form of a courtyard with unusual solid drum towers flanking the gate and the corner towers. Sometime in the early 14th century, the towers were rebuilt as hollow turrets with internal stairs. Sir Roger de Kirkpatrick seemed to have been staunch in the English cause. It may have been his son who took part in the Comyn murder as a young man yet unknighted, though 150 years went by before any assassin was named. The castle was later held by the Douglases of Morton, before passing to the Maitlands in the 15th century. As the centuries passed, massive outer ramparts and curious underground passages and chambers were added to the castle and led to much puzzlement when discovered by historians. A wooden chalet with eight chimneys was also built and used to entertain guests after shoots. The castle now stands in ruins near the current Auchen Castle Hotel and wedding venue.