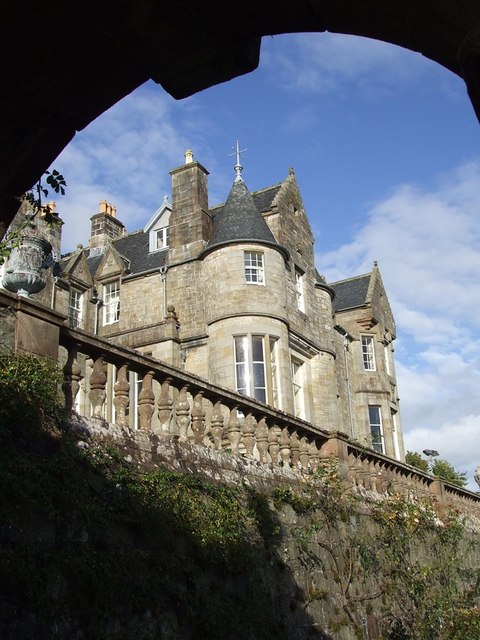 Location: Isle of Mull, Scotland.
Built: 1858.
Condition: Unoccupied residence.
Ownership / Access: Private.
Notes: Torosay Castle is a large house situated 1 1/2 miles south of Craignure on the Isle of Mull, in the Scottish Inner Hebrides. It was designed by architect David Bryce for John Campbell of Possil (see Carter-Campbell of Possil) in the Scottish Baronial style, and completed in 1858. Torosay is surrounded by 12 acres (4.9 ha) of spectacular gardens including formal terraces laid out at the turn of the 20th century and attributed to Sir Robert Lorimer. The castle and gardens used to be open to the public, being linked to the Craignure ferry terminal by the Isle of Mull Railway. The garden's Statue Walk is made up of 19 statues in the style of Italian sculptor Antonio Bonazza. The statues were acquired by then-owner Walter Murray Guthrie from a derelict garden near Milan and shipped to Scotland for next to nothing as ballast in a cargo ship.John Campbell of Possil sold the castle and the estate to Arburthnot Charles Guthrie, a wealthy London businessman, in 1865. It served as his "getaway" and must have been ideal for that purpose, as the castle has over 60 rooms and is surrounded by an estate of over 12 acres (0.049 km2). The current owner is now the sixth generation of the Guthrie family to live in the castle. Following the sale of Guthrie Castle out of the Guthrie family, Torosay is now generally acknowledged as the seat for Clan Guthrie. Torosay was sold in 2012 to the McLean Fund and closed for renovations. Opening December of 2013 with a private family. Christopher Guthrie-James, former Laird of the Estate said "it was with a sense of relief, rather than regret, that we sold the family home at Torosay." Kenneth Donald McLean sixth Laird has spent more than 1 million renovating the castle and gardens. The castle and its gardens were closed to the public in the summer.

How To Get To Torosay Castle (Map):