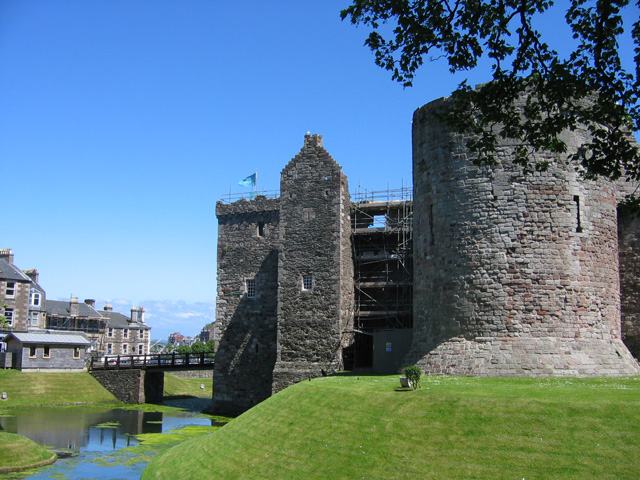 Location: Rothesay, Isle of Bute, Scotland.
Built: 13th century.
Condition: Ruined.
Ownership / Access: Historic Scotland.
Opening Times: Check their website for more info.
Price of Admission: Check their website for more info.
Notes: Rothesay Castle is a ruined castle in Rothesay, the principal town on the Isle of Bute, in western Scotland. Located at NS086646, the castle has been described as "one of the most remarkable in Scotland", for its long history dating back to the beginning of the 13th century, and its unusual circular plan. The castle comprises a huge curtain wall, strengthened by four round towers, together with a 16th-century forework, the whole surrounded by a broad moat. Built by the Stewart family, it survived Norse attacks to become a royal residence. Though falling into ruin after the 17th century, the castle was repaired by the Marquess of Bute before passing into state care in the 20th century. Following a long period of neglect, the 2nd Marquess of Bute employed 70 men to excavate the ruins, clearing large amounts of rubbish from the castle in 1816-17. But it was not until the 1870s that the ruins were stabilised. The 3rd Marquess, a keen restorer of historic buildings, embarked upon a series of repairs and restorations, following surveys and advice from his regular architect William Burges. His "restorations" continued until 1900, and include the clearing and shaping of the moat, as well as the red sandstone additions to the forework, which reinstated the hall roof while significantly altering the character of the building. In 1961 Rothesay Castle was given to the state, and is now a Scheduled Ancient Monument, in the care of Historic Scotland. The castle is open to visitors year round. Fine views can be seen from the top of the walls over the town and back towards the mainland.

How To Get To Rothesay Castle (Map):