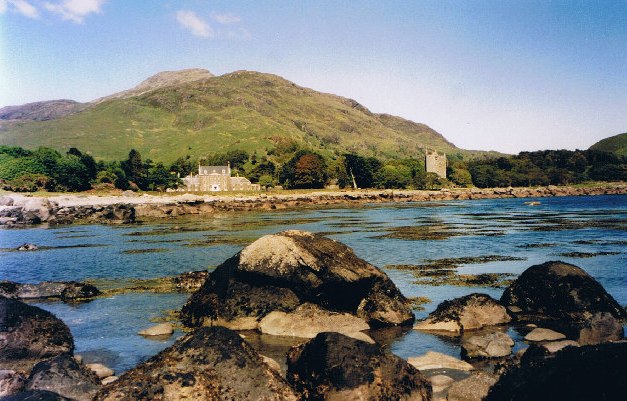 Location: Lochbuie, Mull, Scotland.
Built: 15th century.
Condition: Ruined.
Ownership / Access: --
Notes: Moy Castle is an extant, but badly damaged castle near Lochbuie, Mull.Moy Castle was built in the 15th century by Hector Reaganach Maclean, 1st Laird of Lochbuie, brother of Lachlan Lubanach Maclean of Duart. It has a three level tower with a garret. The ground floor contains a well. It was captured from the Macleans of Lochbuie by Clan Campbell, but later returned to the Maclaines. It was abandoned in 1752 when a new house was built. It was used for scenes in Powell and Pressburger's 1945 film I Know Where I'm Going!, and a group of 40 fans visited to celebrate the 60th anniversary of the film's release in 2005.