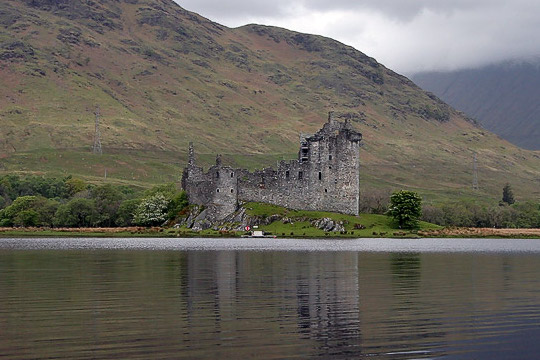 Location: Loch Awe, Argyll and Bute, Scotland.
Built: 15th century.
Condition: Ruined.
Ownership / Access: Historic Scotland.
Opening Times: Check their website for more info.
Price of Admission: Check their website for more info.
Notes: Kilchurn Castle is a ruined 15th and 17th century structure on a rocky peninsula at the northeastern end of Loch Awe, in Argyll and Bute, Scotland. Access to the Castle is sometimes restricted by higher-than-usual levels of water in the Loch, at which times the site effectively becomes a temporary island. It was the ancestral home of the Campbells of Glen Orchy, who later became the Earls of Breadalbane also known as the Breadalbane family branch, of the Clan Campbell. The earliest construction on the castle was the towerhouse and Laich Hall (looks onto Loch Awe).The ruin is currently in the care of Historic Scotland, and is open to the public during the summer. Access, during summer only, is either by boat from Lochawe pier, or on foot from Dalmally. Both points are on the A85 road. During 2006 and 2007 there was an access problem to the castle. Network Rail, in accordance with their policy of blocking foot crossings on railway lines, closed the crossing to Kilchurn, effectively removing land access. However, in 2007 access under the nearby viaduct was created, restoring landward access once more. As of June 2015, the gates giving access by this route from the car park were open and in use.

How To Get To Kilchurn Castle (Map):