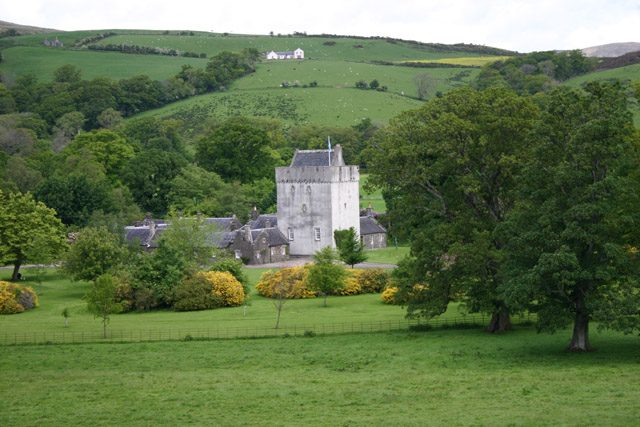 Location: Isle of Bute, Scotland.
Built: 14th century.
Condition: Still in use as a residence.
Ownership / Access: Private.
Notes: Kames Castle is a castellated mansion house on the Isle of Bute, Scotland. On the shore of Kames Bay near Port Bannatyne, the castle consists of a 14th-century tower, with a house built on it in the 18th Century. The Castle is set in 20 acres (81,000 m2) of planted grounds, including a two-acre 18th Century walled garden. Originally the seat of the Bannatyne family, Kames is one of the oldest continuously inhabited houses in Scotland. Sir William Macleod Bannatyne (Lord Bannatyne) (1743-1833) was a distinguished lawyer and judge in Edinburgh. He lost his fortune and was forced to sell Kames in 1812. James Hamilton bought Kames Castle in 1812. Kames was the birthplace, and early home of the critic and essayist John Sterling. Thomas Carlyle in his biography refers to the castle as 'a kind of dilapidated baronial residence to which a small farm was then attached'. In the mid to late 20th century, Kames was a local authority children's home. Today the castle is privately occupied with a number of cottages available as holiday lets.

How To Get To Kames Castle (Map):