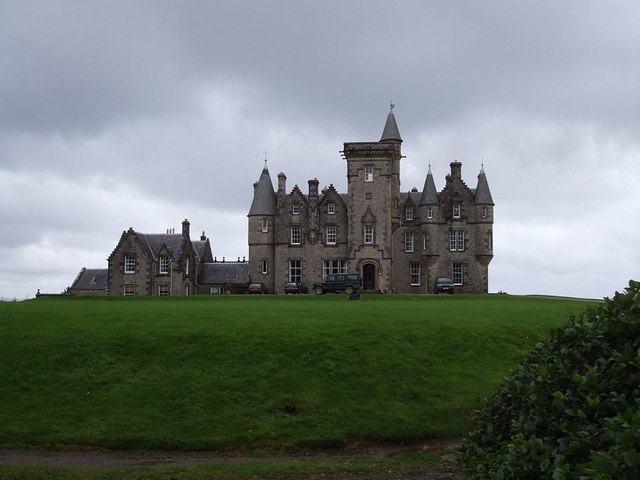 Location: Isle of Mull, Scotland.
Built: 1860.
Condition: In use as a hotel and venue.
Ownership / Access: Private.
Opening Times: Check their website for more info.
Price of Admission: Check their website for more info.
Notes: Glengorm Castle, also known as Castle Sorn, is a 19th-century country house on the Isle of Mull, Scotland. Located 6 kilometres (3.7 mi) northwest of Tobermory, the house is protected as a Category B listed building. The Mishnish estate was purchased in 1856 by James Forsyth of Quinish.[1] He cleared the existing township of Sorne to make way for the new house, which was completed in 1860. The house was designed by Kinnear and Peddie in a Scots Baronial style. It is now operated as a guest house and wedding venue, with a cafe and shop in the former stables. The castle is located on a headland and overlooks the Atlantic Ocean. On a clear day the Outer Hebrides and Islands of Uist, Rm and Canna can be viewed from the castle. Forsyth was a hated figure on the island. He cleared the crofters from the area by bullying and concerted pressure. One old woman had a title to her land which Forsyth took from her and throwing it into the fire told her she had a week to leave. Upon his return he was meet by the woman and the local minister who had kept the original. Forsyth incadescent with rage decided to fence her in so that she could not leave to get provisions. However the woman managed very well it was said that men climb the cliffs near by to bring provisions. When Forsyth was building the castle he was told by an old woman he would never live in the place. He died just before it was opened. Forsyth when building asked an elderly woman what he should call his splendid new house, she said call it Glengorm, he did not understand that it means blue smoke a comment on the peat smoke that would no longer be seen from the houses of the people he had made homeless. Many of the folk moved into Tobermory to find work.

How To Get To Glengorm Castle (Map):