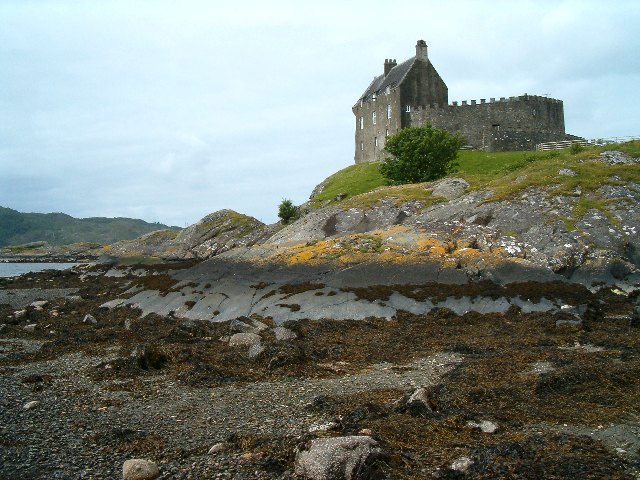 Location: Crinan, Argyll, Scotland.
Built: 13th century.
Condition: Still in use as a residence.
Ownership / Access: Chief of Clan Malcolm.
Notes: Duntrune Castle is located on the north side of Loch Crinan and across from the village of Crinan in Argyll, Scotland. It is thought to be the oldest continuously occupied castle on mainland Scotland. The castle is a category B listed building. It was originally built by the MacDougall clan in the 12th century, along with several other castles in the area, including the MacDougall stronghold of Dunollie Castle near Oban. Duntrune Castle was eventually taken by the Clan Campbell. In 1644, the castle was besieged by the rival MacDonalds, under Alasdair Mac Colla. The Campbells sold Duntrune in 1792, to the Malcolms of Poltalloch. The castle is now owned by Robin Neill Malcolm, current clan chief of the Clan Malcolm. The curtain wall of the castle dates from the 13th century, although the tower house which forms the main part of the castle is of the 17th century. The castle was renovated in 1954.

How To Get To Duntrune Castle (Map):