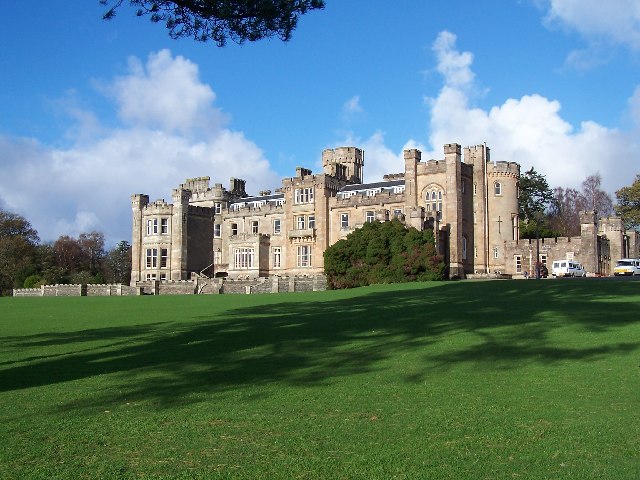 Castle Toward Photo - william craig - Wikipedia - lic. under CC BY 2.0

Location: Cowal peninsula, Argyll, Scotland.
Built: 1940.
Condition: In use as education centre.
Ownership / Access: Argyll and Bute Council.
Notes: Castle Toward is a nineteenth-century country house on the southern tip of the Cowal peninsula in Argyll, Scotland. Built in 1820 it replaced a late medieval castle, which was home of the Clan Lamont. In the Second World War it served as HMS Brontosaurus, and after the war it was sold to Glasgow Corporation. It was used as an outdoor education facility until closure in 2009. The original Toward Castle dates from the 15th century, and was owned by the Clan Lamont until 1809. The castle was extended in the 17th century, but was abandoned after an attack by the Clan Campbell in 1646. The ruins lie around 500 metres (1,600 ft) south-east of the later building.On 13 November 2009 Argyll and Bute Council temporarily closed the castle on the recommendation of Strathclyde Fire and Rescue, on the grounds that it was unfit for purpose. There have since been several attempts by the council to sell the estate, but all have met with fierce local opposition. The castle's former composer-in-residence, John Maxwell Geddes, wrote a Postlude for Strings in protest at plans to sell the castle. The Council placed the building on the market in 2010, and in response the South Cowal Community Development Company (SCCDC) was formed to explore community ownership of the castle, though their initial bid was rejected by the Scottish Ministers in 2011. An agreement was reached with a holiday company, which then pulled out of the sale in 2013 forcing the Council to market the property once more. SCCDC launched a second community ownership bid which was accepted by Scottish Ministers in November 2013. However, in December 2014 the Council rejected SCCDC's offer, claiming that at 865,000 it was below market value, and instead offered to support SCCDC with a loan. SCCDC dismissed the Council's proposal in January 2015, stating that securing the community purchase before a 31 January deadline now had "very little chance of succeeding". By 26 January, 5,600 people had signed an online petition calling on the Council to reconsider their decision. The council placed the castle back on the market in April 2015 with an asking price of 1.75M

Castle Toward On Wikipedia