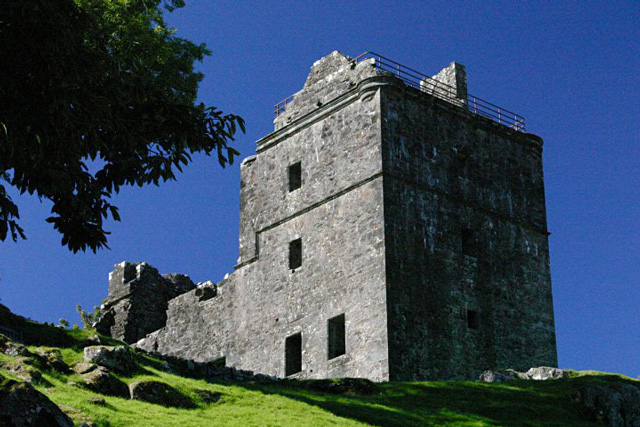 Location: Kilmartin, Argyll and Bute, Scotland.
Built: 16th century.
Condition: Ruined.
Ownership / Access: Historic Scotland.
Opening Times: Check their website for more info.
Price of Admission: Check their website for more info.
Notes: Carnasserie Castle (also spelled Carnassarie) is a ruined 16th-century tower house, noted for its unusual plan and renaissance detailing. It is located around 2km to the north of Kilmartin, in Argyll and Bute, western Scotland, at grid reference NM837009.The castle was built by reforming churchman John Carswell, who was Rector of Kilmartin, Chancellor of the Chapel Royal at Stirling, and later titular Bishop of the Isles. Carswell published the first book to be printed in Scottish Gaelic, a translation of John Knox's Book of Common Order. Construction began in 1565 using masons brought from Stirling. Although the castle was notionally built for Carswell's patron, the Earl of Argyll, he intended it as a personal residence for himself. On Carswell's death in 1572, the castle passed to his patron, the Earl of Argyll. Later, in 1643, the 8th Earl of Argyll sold Carnasserie to Sir Dugald Campbell, 3rd Baronet of Auchinbreck. Following the 9th Earl's failed uprising in support of the Monmouth Rebellion, against James VII in 1685, the castle was blown up by Royalist forces. Although the outer walls remain largely undamaged, the ruins were never repaired. In the 19th century the estate was sold to the Malcolms of Poltalloch, who also own nearby Duntrune Castle. Today it is a Scheduled Ancient Monument in the care of Historic Scotland (no entrance fee; open in summer).

How To Get To Carnasserie Castle (Map):