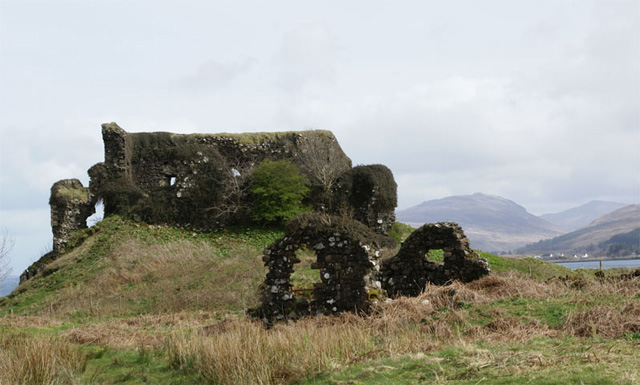 Location: Isle of Mull, Scotland.
Built: 13th century.
Condition: Ruined.
Ownership / Access: Private.
Notes: Aros Castle, also known as Dounarwyse Castle, is a ruined 13th-century castle near Salenn on the Isle of Mull, Scotland. The castle overlooks the Sound of Mull. The castle was a stronghold of the Clan MacDougall, Clan Donald and Clan Maclean during its occupation. A Scheduled monument that includes the 13th-century hall-house and bailey with traces of other buildings, possibly of a later date, and a small stone-built boat landing east of the bailey. The structure appears to have comprised two main storeys and a part attic. The castle was probably built by one of the MacDougall lords of Lorn in the 13th century. Documentary evidence from the late 14th century records it as Dounarwyse Castle in the possession of the Lords of the Isles. Lord Ochiltree entertained the Island Chiefs here before making them prisoners 1608. It was described as 'ruinous, old, useless and never of any strength' in 1688 but seems to have been garrisoned by Argyll's troops in 1690. No evidence exists of any occupation in the 18th century or later.