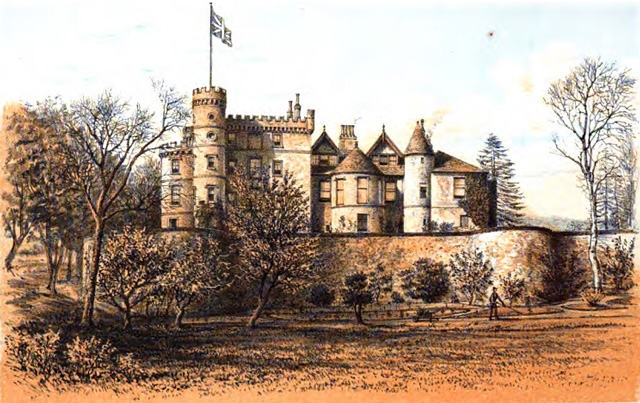 Location: Rhu, Helensburgh, Argyll and Bute, Scotland.
Built: 12th century.
Condition: Demolished.
Ownership / Access: Royal Navy.
Notes: Ardencaple Castle, also known as Ardincaple Castle, and sometimes referred to as Ardencaple Castle Light, is a listed building, situated about 1 statute mile (1.6 km) from Helensburgh, Argyll and Bute, Scotland. Today, all that remains of the castle is a tower, perched on the edge of a plateau, looking down on a flat tract of land between it and the shore of the Firth of Clyde. The original castle was thought to have been built sometime in the 12th century, and part of the remains of the original castle were said to have existed in the 19th century. Today, that sole remaining tower is used as a navigational aid for shipping on the Firth of Clyde. Because of its use as a lighthouse the tower has been called Ardencaple Castle Light.