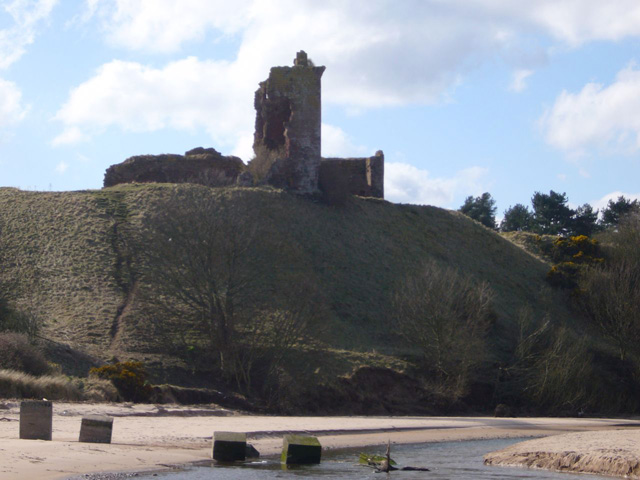 Location: Angus, Scotland.
Built: 15th century.
Condition: Ruined.
Ownership / Access: Private.
Opening Times: Check their website for more info.
Price of Admission: Check their website for more info.
Notes: Red Castle of Lunan is a ruined fortified house on the coast of Angus, Scotland. It is about 4 miles (6.4 km) south-southwest of Montrose. The earliest structure on the site was built for King William the Lion in the late twelfth century to repel Viking invasions to Lunan Bay. Evidence shows, however, that William took up residence there on several occasions whilst on hunting expeditions. In 1194, William conferred the castle, and land surrounding the village of Inverkeilor, 2 kilometres (1.2 mi) east of the castle, to Walter de Berkely, the Royal Chamberlain. On his death, his lands of Inverkeilor, with the castle, passed to Ingram de Balliol who had married the heiress of Walter. He rebuilt the castle and the property remained in that family for two generations. When his grandson, Ingram, who flourished between 1280-84, died childless about 1305 the property passed to the son of Constance de Baliol, Henry de Fishburn. The property was forfeit during the reallocation by Robert I and in 1328, Robert the Bruce gave the castle to the Earl of Ross. The castle is referred to as rubeum castrum (Latin for Red Castle) in deeds of 1286, referring to its burnished red sandstone, typical of this area. In 1579, James, son of Lord Gray, married Lady Elizabeth Beaton, who owned the castle, and fell in love with her daughter. After Lady Beaton threw him out, Gray (with his brother Andrew of Dunninald) laid siege to the castle for two years, ultimately burning the inhabitants out. From then on the castle slipped into decline, and, although it remained partially roofed until 1770, it was never again a residence of nobility. Its last inhabitant was the minister of Inverkeilor, one James Rait.

How To Get To Red Castle (Map):