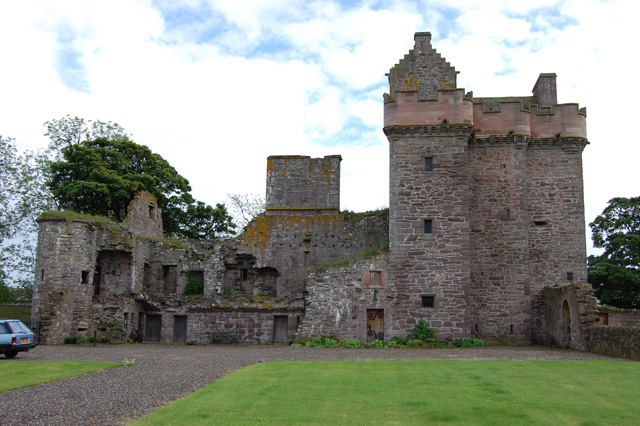 Location: Aberlemno, Angus, Scotland.
Built: 16th century.
Condition: Restored as a residence.
Ownership / Access: Private.
Notes: Melgund Castle, lying around 2 kilometres due east of Aberlemno in Angus, Scotland, is a restored 16th-century house which today serves as a private residence. The castle is generally said to have been built in 1543 on the orders of Cardinal David Beaton as a home for himself and his mistress, Margaret Ogilvie. However, Charles McKean has argued that the work of the 1540s was a re-modelling of an earlier building. It much later passed by marriage to the Earls of Minto, who were granted the title Viscounts Melgund, presently used by the heir to the earldom. The building is L-shaped and was probably styled on 15th century fortified houses. Archaeological investigations were carried out at the castle between 1990 and 1996. The castle was long in a semi-ruined state, and lacking a roof, until restored by Benjamin Tindall Architects.