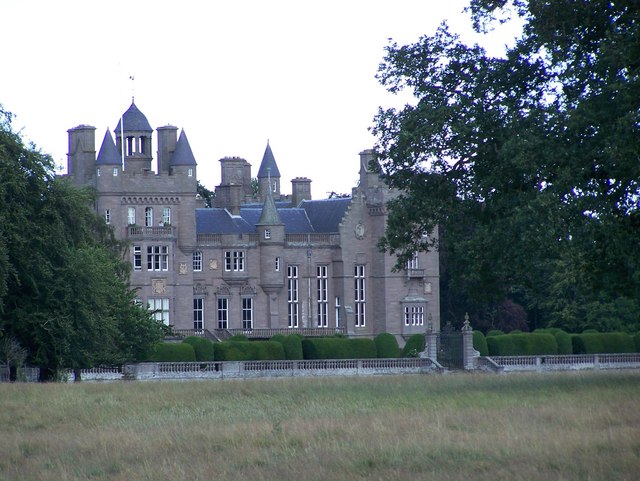 Location: Angus, Scotland.
Built: 1855.
Condition: In use as a residence.
Ownership / Access: Earl of Southesk.
Notes: Kinnaird Castle is a 15th-century castle in Angus, Scotland. A castle was listed onsite in 1409, when the estate was granted to the Clan Carnegie. After the Battle of Brechin on 18 May 1452, the castle was burnt by Alexander Lindsay, 4th Earl of Crawford as Clan Carnegie had supported King James II of Scotland.In 1617, King James VI stayed at Kinnaird. King Charles I and Charles II also visited the castle. James Graham, 1st Marquess of Montrose spent 3 years at Kinnaird from 1629.During the winter of 1715, James Francis Edward Stuart (The Old Pretender) spent some time at the castle. As punishment for supporting the Jacobite rising of 1715, the estate was confiscated. The castle was transformed by the architect, James Playfair in 1791 into a large house.The castle returned to Clan Carnegie ownership in 1855 and was remodeled in Victorian baronial style.The castle burnt to the ground in 1921 and was rebuilt.