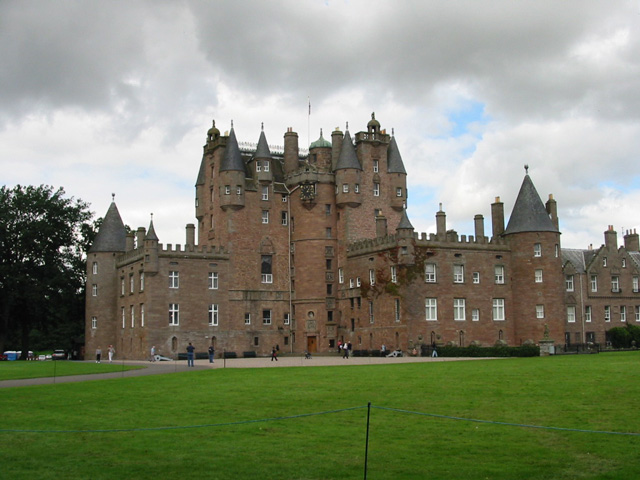 Glamis Castle Photo - Uploaded by Baryonic Being - commonswiki - Wikipedia - lic. under CC BY 1.0

Location: Glamis, Angus, Scotland.
Built: 14th century.
Condition: In use as a residence.
Ownership / Access: Earl of Strathmore and Kinghorne.
Opening Times: Check their website for more info.
Price of Admission: Check their website for more info.
Notes: Glamis Castle is situated beside the village of Glamis in Angus, Scotland. It is the home of the Earl and Countess of Strathmore and Kinghorne, and is open to the public. Glamis Castle has been the home of the Lyon family since the 14th century, though the present building dates largely from the 17th century. Glamis was the childhood home of Queen Elizabeth The Queen Mother, wife of King George VI. Their second daughter, Princess Margaret, Countess of Snowdon, was born there. The castle is protected as a category A listed building, and the grounds are included on the Inventory of Gardens and Designed Landscapes in Scotland, the national listing of significant gardens.The most famous legend connected with the castle is that of the Monster of Glamis, a hideously deformed child born to the family. Some accounts came from singer and composer Virginia Gabriel who stayed at the castle in 1870. In the story, the monster was kept in the castle all his life and his suite of rooms bricked up after his death.Another monster is supposed to have dwelt in Loch Calder near the castle. An alternative version of the legend is that to every generation of the family a vampire child is born and is walled up in that room. There is an old story that guests staying at Glamis once hung towels from the windows of every room in a bid to find the bricked-up suite of the monster. When they looked at it from outside, several windows were apparently towel-less. The legend of the monster may have been inspired by the true story of the Ogilvies.Somewhere in the 16-foot-thick (4.9 m) walls is the famous room of skulls, where the Ogilvie family, who sought protection from their enemies the Lindsays, were walled up to die of starvation.According to the official website for Glamis Castle, in 1034, King Malcolm II was mortally wounded in a nearby battle and taken to a Royal Hunting Lodge, which sat at the site of the present castle, where he died. The late Sir David Bowes-Lyon, while taking a late stroll on the lawn after dinner, reportedly saw a girl gripping the bars of a castle window and staring distractedly into the night. He was about to speak to her when she abruptly disappeared, as if someone had torn her away from the window.The towers in front of the castle each measure 7 metres (23 ft) in diameter and are about 4 metres (13 ft) high, each having a modern parapet. The walls are 1 metre (3 ft 3 in) thick. There is a small chapel within the castle with seating for 46 people. The story given to visitors by castle tour guides states that one seat in the chapel is always reserved for the "White Lady" (supposedly a ghost which inhabits the castle), thought to be Janet Douglas, Lady Glamis. According to the guides, the chapel is still used regularly for family functions, but no one is allowed to sit in that seat.

How To Get To Glamis Castle (Map):