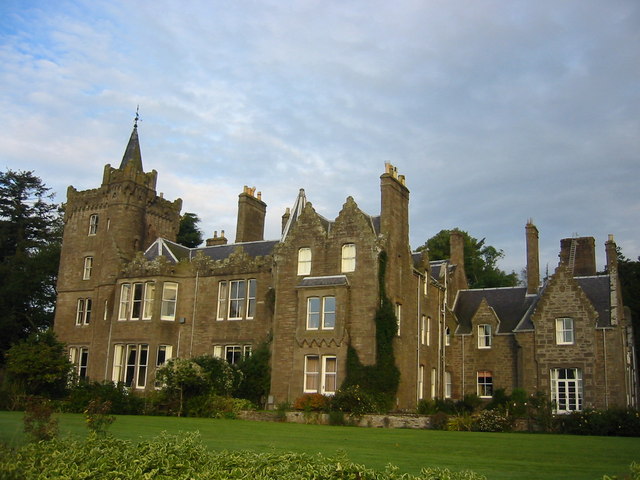 Location: Forfar, Angus, Scotland.
Built: 1856.
Condition: In use as a residence.
Ownership / Access: Private.
Notes: Finavon Castle lies on the River South Esk, about a quarter of a mile south of Milton of Finavon village and five miles to the north-east of Forfar in Angus, Scotland. The name is applied both to a ruined 17th-century castle, as well as the 19th-century mansion house 130m to the west.The estate was the property of the Lindsay Earls of Crawford from 1375, who built the now ruined castle. David Lindsay, 10th Earl of Crawford, married Margaret, the daughter of Cardinal David Beaton, at Finavon in 1546. Extravagance ruined the Crawford fortunes, and in 1625 the barony of Finavon was disposed of by a forced sale to Alexander Lindsay, 2nd Lord Spynie. It passed through the Carnegie family, the Gordon Earls of Aboyne and the Gardynes. In 1843 the Castle was bought by Thomas Gardyne of Middleton. Through an 18th-century marriage he came of the old Lindsay stock. His descendant, Lieutenant-Colonel Alan David Greenhill Gardyne died in 1953, leaving the estate to a daughter, Mrs Susan Mazur.

How To Get To Finavon Castle (Map):