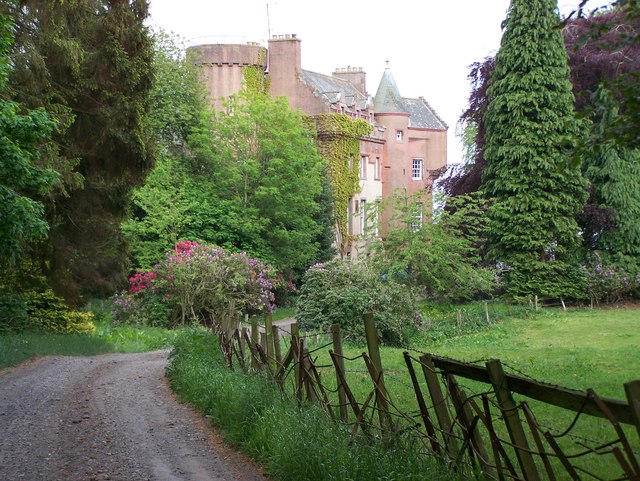 Location: Angus, Scotland.
Built: 1545.
Condition: Occupied. Currently on hire as a venue for wedding receptions and parties.
Ownership / Access: Private.
Notes: Colliston Castle, near Arbroath, Scotland, was built in 1545 by Cardinal Beaton, abbot of Arbroath Abbey. It was a Z-plan tower house, and was altered and extended in the 18th and 19th centuries. The castle is currently on hire as a venue for wedding receptions and parties. The estate was granted to John Guthrie and Isabella Ogilvy, his wife, by Cardinal David Beaton, Abbot of Arbroath and Archbishop of St Andrews, on 25 July 1544. David Beaton's long term partner of over twenty years was Marion Ogilvy, and it is quite likely Isabella was their daughter. The original Z-plan part of the Castle of Colliston was erected in 1583. It consists of a main block with two round towers projecting at opposite corners, and a stair turret rising in one of the re-entrant angles between the main block and tower. This tower, which also houses the entrance to the castle, is corbelled out at the top to form a gabled watch chamber. The plan is similar to Claypotts Castle and is amply provided with wide splayed gun loops and circular shot-holes for defence. The wall heads and the entire upper storey were remodelled at several times and are not original. Sir Henry Guthrie sold to Doctor Gordon in 1684. By 1721 George Chaplin was in possession of Colliston, and was succeeded by his nephew George Robertson Chaplin of Auchengray, and then George Chaplin Child Chaplin, M.D. He died in 1883, and was succeeded by Mr Peebles of Somerset House, London, the next heir of entail. In 1920 John Hume Adams Peebles-Chaplin sold it to Richard (Dicky) Bruce (Major R.F.D. Bruce), son of the Hon. F. J. Bruce of Seaton, who was a son of the Earl of Elgin. He installed a gun cupboard in part of the original kitchen fireplace in the west tower. This room became the gunroom. In 1929 Dicky Bruce was found dead in the hall with his gun beside him. On the death of her husband his wife married a local (Arbroath) lawyer she was having an affair with and sold the castle to Captain Alfred Knox.

How To Get To Colliston Castle (Map):