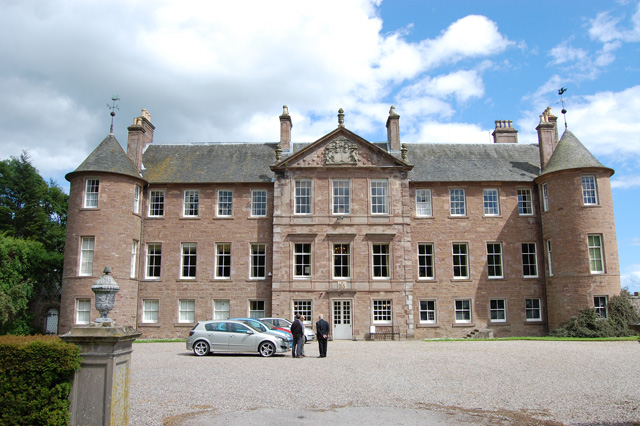 Location: Brechin, Angus, Scotland.
Built: 1709.
Condition: In use as a residence.
Ownership / Access: Earl of Dalhousie.
Opening Times: Check their website for more info.
Price of Admission: Check their website for more info.
Notes: Brechin Castle is a castle located in Brechin, Angus, Scotland. The castle is the seat of the Earl of Dalhousie, who is the clan chieftain of Clan Maule of Panmure in Angus, and Clan Ramsay of Dalhousie in Midlothian. The original castle was constructed in stone during the 13th century. Most of the current building dates to the early 18th century, when extensive reconstruction was carried out by architect Alexander Edward for James Maule, 4th Earl of Panmure, between approximately 1696 and 1709. The grounds have been in the Maule-Ramsay family since the 12th century. The castle has been the seat of the Clan Maule since medieval times. The Maule and Ramsay clans were joined under a single chieftain in the 18th century. The seat of the Ramsay clan was moved from Dalhousie Castle to Brechin Castle in the early 20th century. The estate consisted of approximately 150,000 acres (607 km) at its height and is now 55,000 acres (223 km). The formal gardens date to the early 18th century. Agriculture and forestry largely dominate the estate grounds, but tourists can stay at several guest lodges on the property. A 1990s addition to the grounds is Brechin Castle Centre, a retail shopping complex. Included in the centre is the Pictavia Visitor Centre, an interactive museum chronicling the culture and history of the Picts.

How To Get To Brechin Castle (Map):