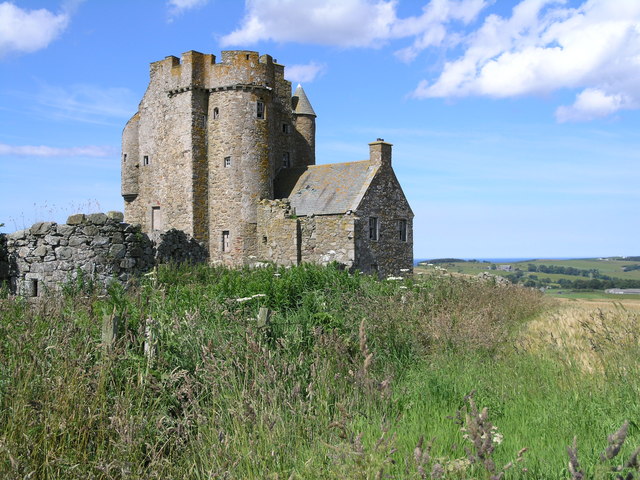 Location: Banff, Aberdeenshire, Scotland.
Built: 16th century.
Condition: Ruined.
Ownership / Access: Private.
Notes: Inchdrewer Castle is a 16th-century tower house in the parish of Banff, Aberdeenshire, in the northeast of Scotland. Situated on a slight rise 3.5 miles (5.6 km) southwest of Banff, it looks across to Banff Bay. Originally owned by the Currour family, it was purchased by the Ogilvies of Dunlugas in 1557 and became their main family seat. The Ogilvies were staunch Royalists, which resulted in the castle coming under attack from the Covenanters in 1640. George Ogilvy, 3rd Lord Banff was murdered in 1713 and his body hidden inside the castle, which was then set on fire. The castle came under siege again in 1746, during the Jacobite rebellion. At the start of the 19th century, following the death of the 8th Lord Banff, the property was inherited by the Abercromby of Birkenbog family, who leased it to a tenant. It became uninhabited after 1836 and the structure deteriorated. Over the following century the neglect continued until some basic external renovation work was undertaken between 1965 and 1971, making the structure wind and water tight, although it remained unoccupied. The castle was again abandoned and left unmaintained. The condition of the building further declined, becoming derelict. It was in a ruinous state when marketed for sale in April 2013 after the death of Count Robin Mirrlees, who had owned it for about fifty years. At the end of that year it was purchased by the former model Olga Roh, who said she intended to restore it. Modern day reports suggest that the spirit of the 3rd Lord Banff and that of a white dog haunt the castle, which is classified as a category A listed building. The castle was purchased by Count Robin Mirrlees in 1962 or 1963. Renovation work was possibly undertaken in 1965 by architect Oliver Hill,although his undated drawings may not have been fully implemented. After visiting the property in 1966, Nigel Tranter, author and historian, reported that work had begun on the structure but described it as a "ruinous shell of a house". Some structural restoration work was undertaken and the castle was slightly repaired, sufficient to have made it "wind and watertight" by 1971. But it was then abandoned again, and further deterioration occurred it had been uninhabitable since 1836, and Mirlees never lived in it.Internally, only basic work was undertaken. Local residents believed the only time the interior was used during this period was when a ceremony was held to site a plaque commemorating the completion of external work in 1971. Historic Scotland designated Inchdrewer Castle a category A listed building in February 1972.The poor condition of the property was highlighted in a report expressing concern by the Scottish Civic Trust in 1999. Inspections by Aberdeenshire Council officials described it as "showing signs of a lack of maintenance" in February 2008, with all its windows broken. Further decline was noted in October 2010, and the castle was said to be "on the cusp of ruination". Further deterioration was noted when the castle was visited in December 2012. Mirlees died on 23 June 2012 and disinherited his son by leaving the property to his teenage grandson.Together with the title of "Baron of Inchdrewer" the castle ruins were put up for sale in April 2013, and purchased in November 2013 for about 400,000 by Olga Roh, former Valentino and Versace model and owner of Rohmir. Roh had never been to Scotland and had not seen the castle before she bought it, but said she planned to restore it so it could be used for fashion shoots, as a film location, or as a residence. Other suggestions were use as a holiday destination for friends or a boutique hotel.Twenty-first century newspaper stories report that the ghost of the murdered George Ogilvy, 3rd Lord Banff, haunts the castle. Nigel Tranter visited Inchdrewer again in the 1970s and a large white dog, which he speculated may have been a Samoyed, bounded out of the castle as he approached it with a local builder. Unable to explain how the dog could have been confined in the castle for seven days, he was later sent a copy of the magazine Vogue, in which it was stated that the castle was "haunted by a lady in the shape of a white dog".