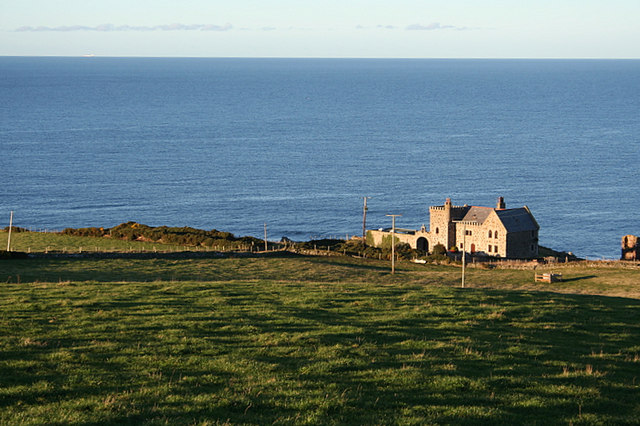 Location: New Aberdour, Aberdeenshire, Scotland.
Built: 14th century, rebuilt 16th century.
Condition: Ruined.
Ownership / Access: Private.
Notes: Dundarg Castle is a ruined castle about 2 kilometres (1.2 mi) north-northeast of New Aberdour, Aberdeenshire, Scotland. It was described by W. Douglas Simpson as one of the nine castles of the Knuckle, referring to the rocky headland of north-east Aberdeenshire. It was built in the thirteenth century by the Comyn family, and subsequently dismantled, probably by Robert the Bruce, in 1308. It was rebuilt in 1334 by Henry de Beaumont, but destroyed almost immediately, after a famous siege by Sir Andrew Moray. Evidence of this double destruction was confirmed by excavations during 1911-12 and in 1950-51 (led by W. Douglas Simpson) when many medieval objects were found. The only substantial part of the castle remaining is the inner gatehouse, which survives to a height of about 18 feet (5.5 m). The upper part was rebuilt about the middle of the sixteenth century, probably following the Coastal Defence Commission of 1550, and there is some evidence that it was provided with gunloops at this time. The site was finally abandoned in the mid-17th century, and a house was built on part of it in 1938.

How To Get To Dundarg Castle (Map):